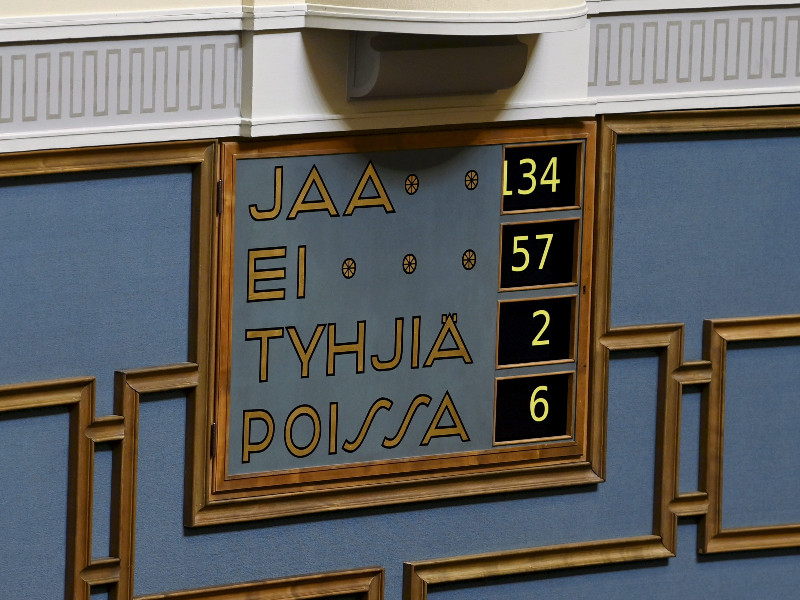 Most of the votes against came from the Finns Party and Christian Democrats. (Vesa Moilanen – Lehtikuva)

THE RECOVERY FACILITY of the European Union has received a two-thirds majority backing from the Finnish Parliament, reports YLE.

Members of the Parliament on Tuesday voted 134 for and 57 against the 750-billion-euro facility devised to jump-start the recovery of the 27-country bloc from the economic crisis set off by the coronavirus pandemic.

The issue divided opinion among both the Centre and National Coalition.

Hannu Hoskonen and Tuomas Kettunen of the Centre voted against the so-called own resources decision, breaking the line adopted by the centre-right party. Antti Kurvinen, the chairperson of the Centre Parliamentary Group, stated to STT that the group will discuss taking disciplinary action against the two dissenters.

“The group will discuss the issue in the coming days. We’ll get back to it then. At this point, I got nothing more to comment on this,” he said.

Hoskonen revealed to the news agency before the vote that the parliamentary group had warned him about different kinds of repercussions.

“You can’t change your mind on something as massive as this, because this is such a big change for the European Union,” he said. “It has been a terribly tough time, but given how big the issue is personal suffering is of no relevance to the matter.”

The decision was also opposed by as many as 10 representatives of the National Coalition, including former speaker and cabinet member Paula Risikko. The Christian Democrats and Finns Party both voted unanimously against the recovery facility.

The vote was initially scheduled to take place on 12 May. The Finns Party, however, delayed the parliamentary debate by several days by sending out one representative after another to the lectern.

Prime Minister Sanna Marin (SDP) and Jussi Halla-aho, the chairperson of the Finns Party, engaged in yet another heated exchange about the recovery facility and the tactics witnessed during the parliamentary process at a municipal election debate hosted on Tuesday by Ilta-Sanomat.

Marin lauded the Parliament for approving an instrument that promotes recovery from an extremely serious health and economic crisis.

“When it comes to the parliamentary debate, I wouldn’t say it’s a measure of the most dignified behaviour to cite hymn books and fairy tales and read various texts for hours on end from the lectern,” she said. “It’s true that representatives have the right to speak, but each representative should evaluate what’s dignified behaviour and what behaviour is beneficial for the matter at hand.”

“These sorts of ignoble comments only prove that chairperson Marin hasn’t looked into the statements heard in the session hall any more than the media,” retorted Halla-aho. “I’m very proud of my parliamentary group. The debate we had, even if it was unilateral for reasons independent of us, the statements were for the most part of high quality.”

The recovery facility has been approved by 21 member states.