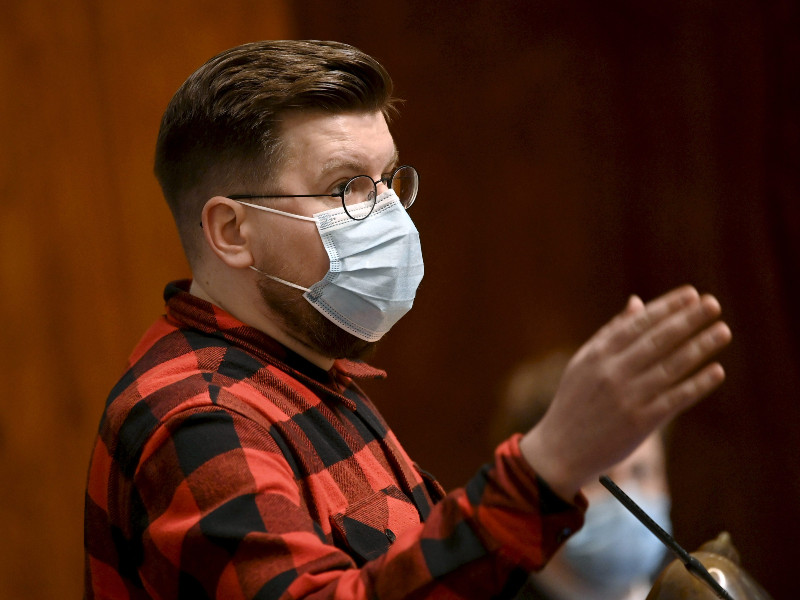 The Finns Party’s Sebastian Tynkkynen made a statement lasting about eight hours in the final stretch of the parliamentary debate about the European Union’s recovery and resilience facility. (Vesa Moilanen – Lehtikuva)

MEMBERS of the Finns Party stopped their collective tirade against the recovery and resilience facility of the European Union in the Finnish Parliament on Saturday.

“That’s exactly how it went. I personally didn’t have anything more to say, but I had been able to say everything I wanted the night before. We stopped once we ran out of things to say,” Riikka Purra, the chairperson of the Finns Party Parliamentary Group, said to Helsingin Sanomat on Saturday.

Deputy Speaker of the Parliament Tarja Filatov (SDP) told YLE that the Parliament will consequently vote on the 750-billion-euro recovery facility on Tuesday. The so-called own resources decision must be approved by at least two-thirds of lawmakers.

Purra underlined that it should not be unusual that lawmakers exercise their constitutional right to address the plenary session. While the Finns Party-fuelled debate has been criticised as irrelevant and inappropriate, she viewed that the party managed to call attention to issues in the recovery package with well formulated arguments and challenge the government with questions that were not answered satisfactorily.

“Of course it varied from one representative to the next how the speeches were structured. I’ve personally learned a lot about the recovery package and the EU in recent days because many really looked into and spent time on their speeches.”

The parliamentary debate over the facility dragged on for days as members of the opposition party continued to request the floor to, for example, read poetry written by their aides and cite excerpts from Little Red Riding Hood.

The longest statement, of roughly eight hours, was made by Sebastian Tynkkynen (PS).

Jussi Halla-aho, the chairperson of the Finns Party, on Saturday told Helsingin Sanomat that the objective was to debate the recovery facility thoroughly.

“We do understand that as a minority we can’t prevent even bad proposals from being passed, but in my view representatives should do their best in all circumstances to promote the things they believe in and that are important for their supporters. Even if defeat is probable, it’s no reason to throw up your hands.”

He rejected accusations that the party held lawmakers hostage or deliberately slowed down parliamentary proceedings, reminding that debating is the primary tool for opposition parties to promote their agenda.

Such accusations were made on Saturday by Minister of Justice Anna-Maja Henriksson (SFP).

“I myself think it’s better that the opposition has the ability to criticise government proposals. The constitution stipulates that representatives have an unlimited right to speak and they can’t be ordered around from the outside.”

Halla-aho also estimated that the debate surrounding the recovery facility has been poor in Finland. Proponents have only made superficial arguments in favour of the facility and neglected to respond to detailed criticism, he stated.