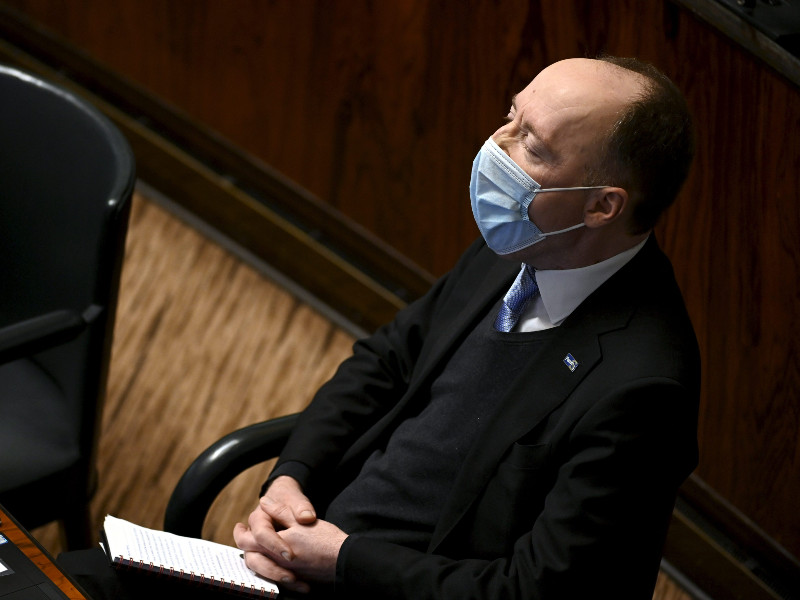 Jussi Halla-aho, the chairperson of the Finns Party, attending a plenary session in the Finnish Parliament on Wednesday, 12 May 2021. (Emmi Korhonen – Lehtikuva)

AN OPINION POLL by Helsingin Sanomat suggests the Finns Party remains in an unprecedentedly good spot heading into the municipal elections scheduled for 13 June.

Even though support for the populist right-wing opposition party stayed unchanged from the previous poll at 21.6 per cent, the party has more breathing room atop the poll due to a drop of 0.7 percentage points in support for the Social Democratic Party.

“The Finns Party is undeniably in a good starting position to succeed in the municipal elections, maybe in the best in the party’s history,” commented Sakari Nurmela, the research director at Kantar TNS.

He also reminded, though, that the party has failed to pull off a so-called jytky, a term it has coined to refer to its surprise performances in parliamentary elections, in municipal elections.

Support for the Social Democrats currently stands at 19.0 per cent, two points lower than in February. The National Coalition, meanwhile, saw its popularity jump by 0.8 points to 17.0 per cent, cementing its position as the third most well supported party in Finland.

“The National Coalition has received quite a bit of publicity, and it has had its moments that may have awaken and reinvigorated its supporter base,” analysed Nurmela. “This is what happened during the government’s framework session and at least early on during the recovery package debate.”

The power balance between political parties has largely remained unchanged, with the other noteworthy developments being a 0.3-point drop in support for the Centre Party (11.1%) and a 0.3-point rise in support for the Left Alliance (8.1%). The former, in particular, is likely disappointed that the defiance it exhibited in the recent framework session has not translated to an up-tick in support.

“It seems that the coalition crisis that took place in conjunction with the framework session has at least not strengthened the Centre’s standing. There’s no difference in the approval rating before and after the crisis,” said Nurmela.

The Swedish People’s Party and Movement Now both recorded an increase of 0.1 points to 4.4 and 2.6 per cent, respectively. No changes were measures in popular support for the Green League (10.0%) or Christian Democrats (3.8%).

The five ruling parties thus have the support of 52.6 per cent of the public, representing a drop of 0.7 points from the previous poll.

Kantar TNS interviewed 2,456 people for the poll between 12 April and 7 May.