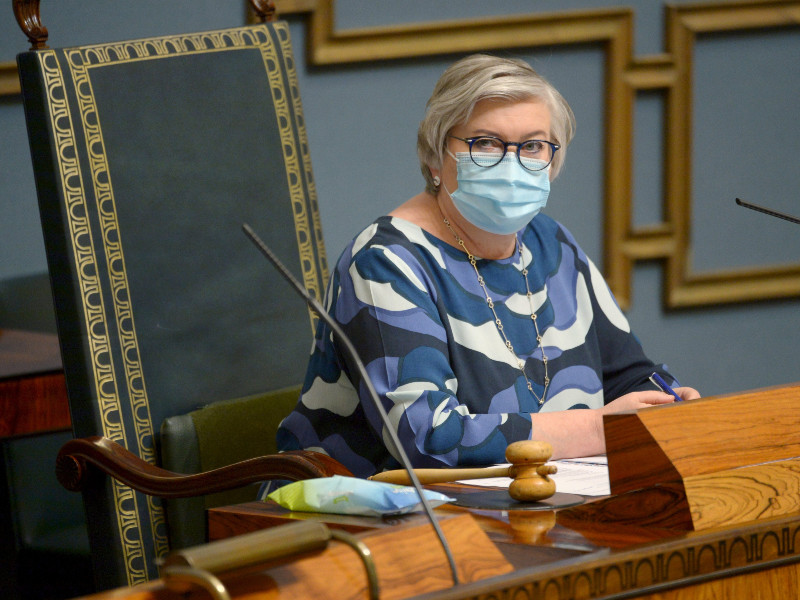 Speaker of the Parliament Anu Vehviläinen (Centre) led the third day of debate over the EU’s recovery facility in the Finnish Parliament on Thursday, 13 May 2021. (Mikko Stig – Lehtikuva)

DEBATE over the European Union’s 750-billion-euro recovery and resilience facility will continue for already the fourth day in the Finnish Parliament on Friday.

Speakers of the Parliament have ruled that the debate will be allowed to come to its natural conclusion, meaning it will continue until lawmakers no longer request the floor to make a statement on the issue.

Members of the Parliament were initially scheduled to vote on the facility on Wednesday.

Stall tactics have been employed primarily by the Finns Party. Members of the populist right-wing opposition party have requested the floor to, for example, read excerpts from hymn books and Little Red Riding Hood, according to YLE.

The party yesterday evening also requested a ruling on the decision to reject of its motion to shelve the issue until the end of June. Members of the Parliament will vote this afternoon on whether to continue the debate or grant the request for a ruling from the Constitutional Law Committee, according to First Deputy Speaker of the Parliament Tarja Filatov (SDP).

Filatov confirmed earlier yesterday to the public broadcasting company that the debate is longer moving forward.

“It’s starting to feel like the dialogue is turning into a prattle. You do get the impression that it’s no longer about trying to influence but simply about trying to cause a delay, and this is naturally confusing,” she said.

“The speakers have no means to call off the debate as long as representatives continue to ask for the floor, nor should they have. That’s clear. It should be on the representatives themselves to realise when they’re starting to impede decision-making instead of influencing it.”

Speaker of the Parliament Anu Vehviläinen (Centre) on Thursday suspended Second Deputy Speaker Juho Eerola (PS) for the duration of the debate due to concerns that he could leverage his powers to postpone the debate further.

“Speakers have great powers in the session hall, including the ability to suspend debate on an issue for a technical break,” she explained, adding that the rules of procedure do not specify how long the break could be. “It was theoretically possible that he could delay the debate by several days, and there would’ve been nothing you could do about it from outside the session hall.”

“I called Juho Eerola about this and we had a talk about whether that’s a risk. I was left with the impression that he isn’t ruling it out and concluded that he therefore won’t be involved in leading the debate on the stimulus package,” Vehviläinen told YLE.

Eerola described his suspension as an unusual measure but admitted he may have used his powers to suspend the debate and postpone it until next Tuesday.

“She’s aware that I’m opposed to passing the support package in question, and she apparently supports it and wants to make sure it’s passed,” he said. “It may be that I’m wrong, but it’s my understanding that nothing like this have ever happened. But from her perspective, it’s a completely understandable decision.”

Other parties have expressed their exasperation with the protracted process.

“This is in no way the appropriate, let alone the dignified, course of action,” Antti Lindtman, the chairperson of the Social Democratic Parliamentary Group, stated to YLE. “The Finns Party’s group has assigned each of its members a turn to speak. For a while now, this hasn’t been about the right or opportunity of representatives to express their views on a particular matter but clearly about using this right to systematically delay the process.”

Anders Adlercreutz, the chairperson of the Swedish People’s Parliamentary Group, agreed, highlighting that some of the statements have consisted fairly personal attacks against cabinet members.

“When the statements are about reading messages received from citizens, there’s every reason to think this is no longer about debating the issue but simply about wasting time.”

Ville Tavio, the chairperson of the Finns Party Parliamentary Group, said in an e-mail to the public broadcasting company that the debate will continue for as long as representatives consider it necessary. The delay, he gauged, will provide undecided lawmakers an opportunity to re-consider their stance on what will be the single most important issue of the electoral term.

“It’s good that we’re having a comprehensive debate about the most important issue of the electoral term. The EU package was put behind the constitutional lock for a good reason, meaning a two-thirds majority of representatives is needed to hand over Finland’s sovereignty to the European Union.”

He rejected the suggestion that his party comrades are testing the limits of democracy, instead shifting the blame to the government.

“It’s the government that has done so because it thwarted the idea of holding a referendum on the issue in conjunction with the municipal elections,” he commented to YLE.