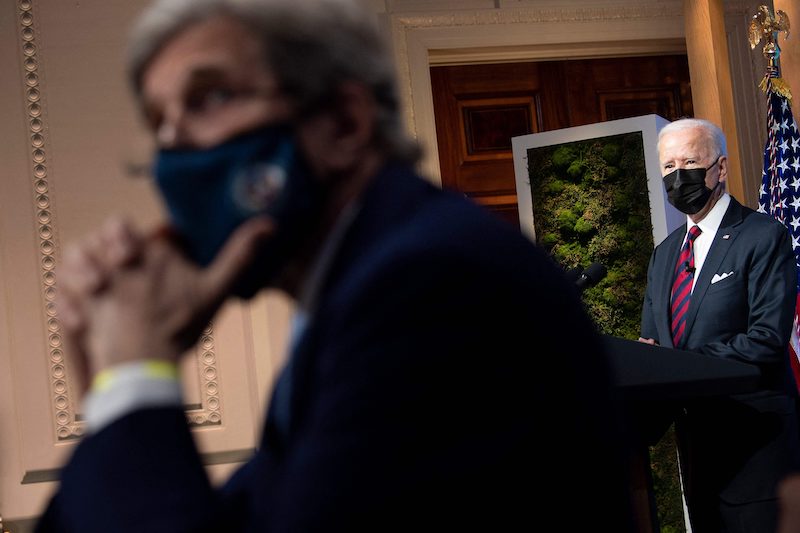 US envoy for climate John Kerry(L) and US President Joe Biden listen during climate change virtual summit from the East Room of the White House campus April 22, 2021, in Washington, DC. LEHTIKUVA / AFP

Minister of the Environment and Climate Change Krista Mikkonen will participate in the ministerial discussions to be held in connection with the US Climate Summit on Friday 23 April. The United States has invited 40 world leaders to a Leaders' Climate Summit on 22–23 April.

are situation reports from different countries on their actions to boost climate ambition and the challenges of international climate policy.

"President Biden's Climate Summit is the first milestone towards the Climate Change Conference in Glasgow. Finland and the EU have already updated their emission reduction targets, and this week an agreement was reached on the EU climate law. It is a great pleasure to have this opportunity to tell how emission reduction measures can be put to practice. However, more people and countries are needed for this joint effort. It is most important that the US, China and other G20 countries will also raise the level of ambition in their climate policy this year," Minister of the Environment and Climate Change Krista Mikkonen says.

Besides the ministerial roundtables, the United States is planning to organise regional consultations on climate policy in the coming months.

The aim of the US Leaders' Climate Summit is to boost the climate targets and action, especially in the large economies. The United States is expected to announce its new emission reduction targets just before the meeting.

On 21 April Minister Mikkonen attended a side event on the 50x30 Initiative organised in connection with the Leaders Climate Summit. The initiative draws attention to emission reduction paths in line with the IPPC 1.5 degrees report which require that countries will reduce their emissions by 45 to 60% by 2030. Besides scientists, ministers from countries with an ambitious climate policy had been invited to the event.