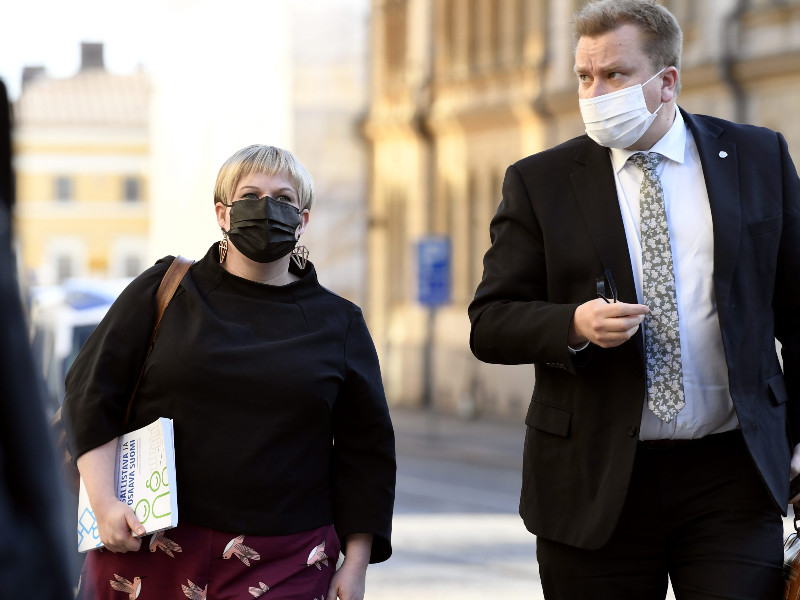 Minister of Science and Culture Annika Saarikko (Centre) and Minister of Defence Antti Kaikkonen (Centre) were photographed arriving for the government’s framework session a the House of the Estates in Helsinki on Thursday, 22 April 2021. (Jussi Nukari – Lehtikuva)

THE GOVERNMENT of Prime Minister Sanna Marin (SDP) will resume its protracted negotiations over the framework for central government spending in the coming years at 9am on Friday.

“The work has progressed, but also fundamental differences of opinion remain. The number of issues that still need to be resolved isn’t too high, but they’re all difficult and related to principles,” he analysed leaving the House of the Estates before Thursday turned into Friday.

The differences of opinion are pronounced especially between the Centre and Left Alliance and Social Democrats. It has even been suggested that the midterm session may be the end of the road of the coalition government.

The government must yet find common ground on issues such as expenditure levels, employment measures, the emissions trading compensation scheme, measures to phase out the energy use of peat and various tax-related questions, according to Vanhanen.

Minister of Science and Culture Annika Saarikko (Centre) said to YLE earlier yesterday that while the government has taken baby steps forward on some issues, it has yet to reach a breakthrough on the issues that remained unresolved at the start of the second day of negotiations.

Peat remains a particularly difficult issue for the ruling coalition. Helsingin Sanomat wrote this morning that its sources within the government believe all ruling parties are ready to devise a support package for the peat industry. The Centre, however, has not budged on its stance and has even indirectly called for lessening some of the tax hikes introduced on peat last autumn.

The sources of the daily expressed their doubt over whether such demands could be met by the Greens.

They also gauged that the parties should find common ground on employment measures. The Centre, they revealed, has withdrawn its demand to reduce earnings-related unemployment security.

The framework session, which marks the halfway point of the government’s term in office, was scheduled to be wrapped up on Thursday, 22 April.