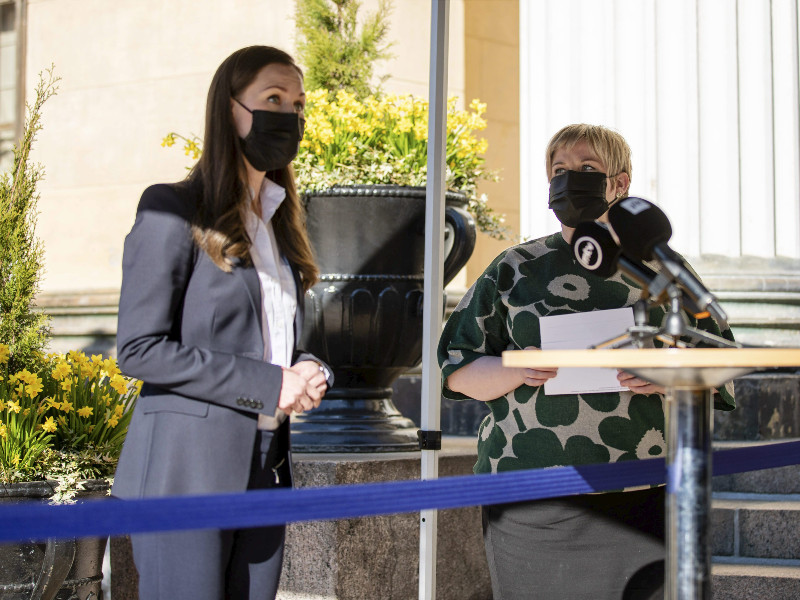 Prime Minister Sanna Marin (SDP) and Minister of Science and Culture Annika Saarikko (Centre) spoke to reporters on the first day of the government’s framework session at the House of the Estates in Helsinki on Wednesday, 21 April 2021. (Handout / Jussi Toivanen – Office of the Prime Minister)

THE FRAMEWORK SESSION of the Finnish government began yesterday with a day of inconclusive talks between the five ruling parties, primarily due to the opposition of the Centre Party.

Prime Minister Sanna Marin (SDP) confirmed yesterday evening that she presented a compromise proposal to the other ruling parties on economic and employment issues.

“I’m hopeful that we can move forward with the negotiations and that there’s a readiness to find solutions,” she was quoted as saying by Helsingin Sanomat.

Marin told YLE yesterday evening that the compromise proposal would meet, if not exceed, the objective of growing the ranks of the employed by 80,000 people. The proposal would, for example, improve the employment prospects of people with limited ability to work and transfer employment services to municipalities from TE Offices.

While the Centre is not opposed to the measures, it is convinced about neither their impact on the public economy, nor the overall credibility of the proposal.

Helsingin Sanomat on Wednesday wrote that the Centre believes the proposal should comprise measures the economic and employment impact of which has been verified by assessments conducted or approved by the Ministry of Finance. The measures, it argued, are therefore incomparable to earlier government measures, such as the removal of the unemployment path to retirement.

The other ruling parties have accused it of deliberately stalling the negotiations.

The left-wing parties have also struggled to identify the right approach to promoting local bargaining, which is one of the objectives of the government programme.

The Centre has publicly called for “responsible management of public finances”, urging the government to put a stop to borrowing and the rise in public expenditure. Its coalition partners, in turn, have criticised it for failing to specify its demands except for cutting earnings-based unemployment security.

The government will continue what was initially scheduled to be a two-day session at 9am today. It is seeming more and more likely that the negotiations will drag on beyond Thursday.