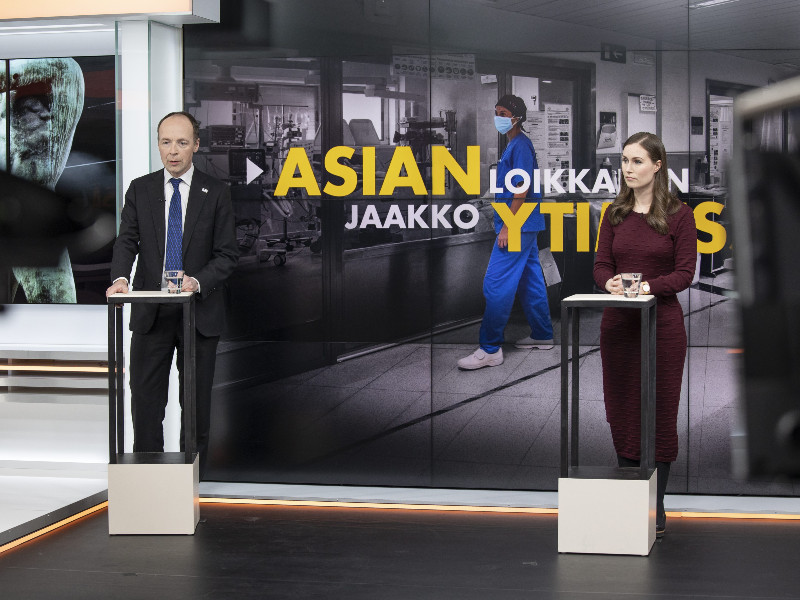 Jussi Halla-aho of the Finns Party and Sanna Marin of the Social Democrats faced off in an election debate hosted by MTV on 8 December 2020. (Handout / Onni Ojala – MTV Oy)

A POLL by Helsingin Sanomat reveals the Finns Party has widened its advantage over the Social Democratic Party.

Popular support for the opposition party, the poll found, has crept up by 0.1 points to 21.6 per cent, while that for the largest of the five ruling parties has fallen by 0.8 points to 19.7 per cent – the first sub-20-per-cent reading since March 2020.

Although the 2,462 poll respondents were asked to disclose their party of choice in the parliamentary elections, the results also provide some indication of the political mood ahead of the municipal elections scheduled for 13 June.

Helsingin Sanomat on Friday wrote that the results certainly bode well for the Finns Party. Its support has not stayed over the 21-per-cent mark throughout the first few months of the year, a level that would signal a four-point increase from its vote share in the latest parliamentary elections and 13-point increase from its share in the latest municipal elections. Its supporters, additionally, are currently more sure about their choice than those of other parties.

It appears that the opposition party has managed to recoup the losses it registered in the first few months of the coronavirus epidemic, when the public expressed its nearly unanimous support for the government effort to manage the epidemic, as the political landscape has moved close to normal.

The Finns Party may have also benefited from its campaign to frame the municipal elections as a vote on the government’s future rather than local policy issues, according to Markku Jokisipilä, the director of the Centre for Parliamentary Studies at the University of Turku.

“If the Finns Party succeeds in this kind of framing […], it may boost its potential further,” he said to Helsingin Sanomat.

Another major observation is that the personal popularity of Prime Minister Sanna Marin (SDP) is no longer inflating the popularity of the Social Democrats.

“You could view that they’ve eaten the capital that was brought by the new face and the relatively widespread public satisfaction with the government’s measures against the coronavirus,” said Jokisipilä.

The National Coalition saw its popularity creep up by 0.2 points to 16.2 per cent, cementing its status as the third most popular party in Finland. The Centre fell from 11.8 to 11.4 per cent, while the Greens and Left Alliance recorded recorded gains of 0.2 and 0.5 points to 10.0 and 7.8 per cent, respectively.

Both the Swedish People’s Party and Movement Now saw their popularity erode by 0.1 points to 4.3 and 2.5 per cent, respectively. The Christian Democrats, in turn, registered an increase of 0.1 points to 3.8 per cent.

The poll was conducted between 15 March and 9 April by Kantar TNS.