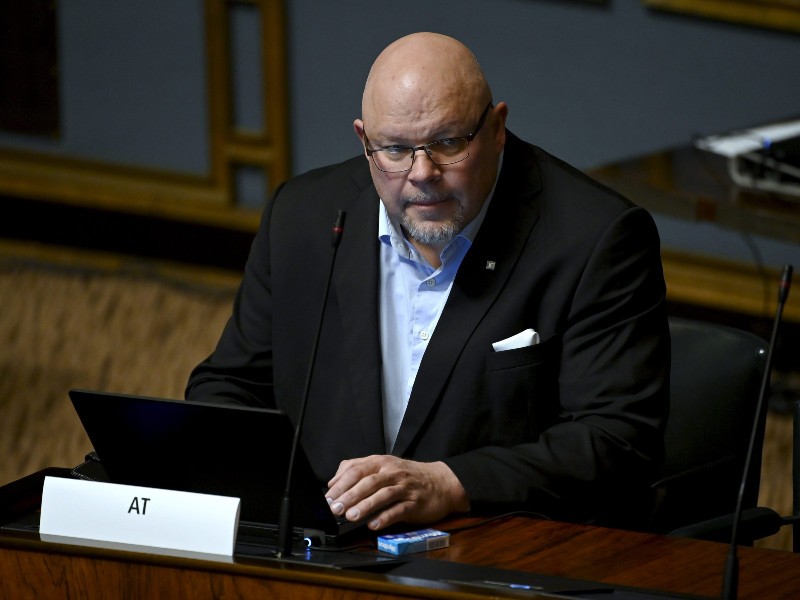 Member of Parliament Ano Turtiainen was photographed during a plenary session in the Finnish Parliament in Helsinki on 9 April 2021. (Emmi Korhonen – Lehtikuva)

Turtiainen on Tuesday wrote on Facebook that he approaches police as he would his worst enemies of war and that he has lost his confidence in the police following a conditional fine issued to his company and police actions during an anti-restrictions protest held in Helsinki on Saturday.

He also estimated that the world is at war and that the situation is unlikely to be solved “without worse scuffles”.

The writing is the second controversial social media post from the outspoken lawmaker in the past couple of days. “My friend told me, ‘I’d be ready to kill if someone is forced to put on a mask in this country’. We’ll I wouldn’t tolerate that either. Greetings to colleagues who are in favour of the mask mandate,” he tweeted on Saturday.

The Speakers of the Parliament and chairpersons of both parliamentary groups and committees met to discuss the tweet at the end of last week. While the participants agreed that no threats of violence should be tolerated, they also recognised that they cannot intervene in the actions of lawmakers taking place outside the Parliament House.

“We were very unanimous that no threats of violence are tolerated – neither open or hidden ones,” Deputy Speaker of Parliament Tarja Filatov (SDP) told Helsingin Sanomat.

Kimmo Nuotio, a professor of criminal law at the University of Helsinki, stated to the newspaper that the more recent post is close to meeting the elements of public incitement to an offence laid down in the criminal code.

“I’d stop short of stating that this meets the criteria for public incitement, but this does paint the picture that police pose some kind of a threat and use of violence against police is justified. That’s very dangerous,” he analysed. “When you enter into the realm of public incitement isn’t exactly clear, but this gets quite close.”

Matti Tolvanen, a professor of criminal law at the University of Eastern Finland, viewed contrastively that it is unlikely the post, however unusual for a lawmaker, meets the elements of an offence.

“Turtiainen writes that he approaches the police as he would his worst enemies of war, but he does not state explicitly that you should take the same course of action against police as you should against an enemy. This is a very ambiguous message, but I don’t think there’s a direct threat here.”

The Finns Party expelled Turtiainen in mid-2020 for posting a photo-shopped image mocking George Floyd, a 46-year-old black man who died pinned to the pavement by a police officer in Minneapolis, the US, in May 2020. The trial in the much-discussed police brutality case began on 29 March.