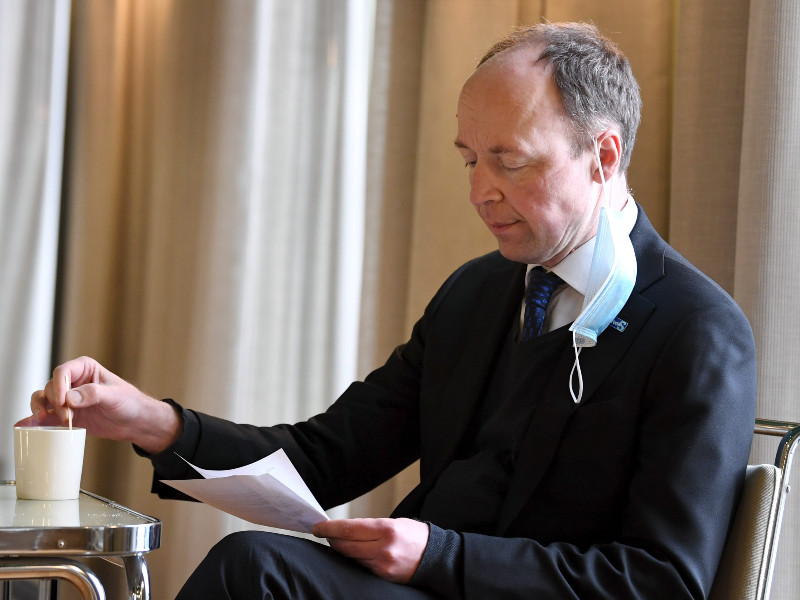 Jussi Halla-aho, the chairperson of the Finns Party, will lead the opposition party to next summer’s municipal elections from the best position ever. (Jussi Nukari – Lehtikuva)

AN OPINION POLL by Helsingin Sanomat suggests the Finns Party has widened its advantage over the Social Democratic Party.

Popular support for the populist right-wing opposition party, the poll found, has crept up by 0.4 percentage points in the past month to 21.5 per cent, whereas that for the ruling party has dipped by 0.5 points to 20.5 per cent.

Sakari Nurmela, the research director at Kantar TNS, said the Social Democrats may have lost ground in the poll due to resurgent concerns about the coronavirus epidemic in Finland.

“Similarly to the Finns Party, they have won public support through their chairperson [Prime Minister Sanna Marin (SDP)]. Marin has been a guarantor in the fight against the coronavirus, but now that the situation looks to have changed it may be reflected in the [party’s] popularity,” he commented to Helsingin Sanomat.

Kantar TNS interviewed 2,462 people for the poll between 15 February and 12 March.

Infection numbers have risen noticeably almost across the country in March, prompting the government to commence preparatory work on restrictions as severe as curfews. Also the municipal elections were recently postponed by a couple of months because of the epidemiological situation, a decision that has come under criticism especially from the Finns Party.

Nurmela also highlighted that the opposition party has managed to steer clear of controversy in recent months, possibly increasing its appeal in the eyes of some voters.

Helsingin Sanomat pointed out that although the respondents were asked to name their party of choice for the parliamentary elections, the poll results can be used to draw some conclusions about the balance of power heading into the municipal elections. The municipal elections are scheduled for 13 June.

The Finns Party, it highlighted, is clearly poised to succeed, having not only consolidated its position at the top of the poll but also secured a record number of candidates – over 1,500 more than in the municipal elections of 2017.

“The Finns Party is undeniably in the best position in its history ahead of the municipal elections,” confirmed Nurmela.

One of the perennial questions around the party, however, is whether it succeeds in mobilising its supporters and realising its full vote potential, he reminded.

Elsewhere, the Centre Party saw its popularity increase by 0.8 points to 11.8 per cent, probably as a result of its old supporters reinstating their support for it. Support for the National Coalition fell by 0.4 points to 16.0 per cent following the withdrawal of its mayoral candidate in Helsinki, Kirsi Piha.

Speculation suggests her surprise withdrawal may be a symptom of internal disagreements within the party. Piha was replaced as the lead candidate by Juhana Vartiainen.