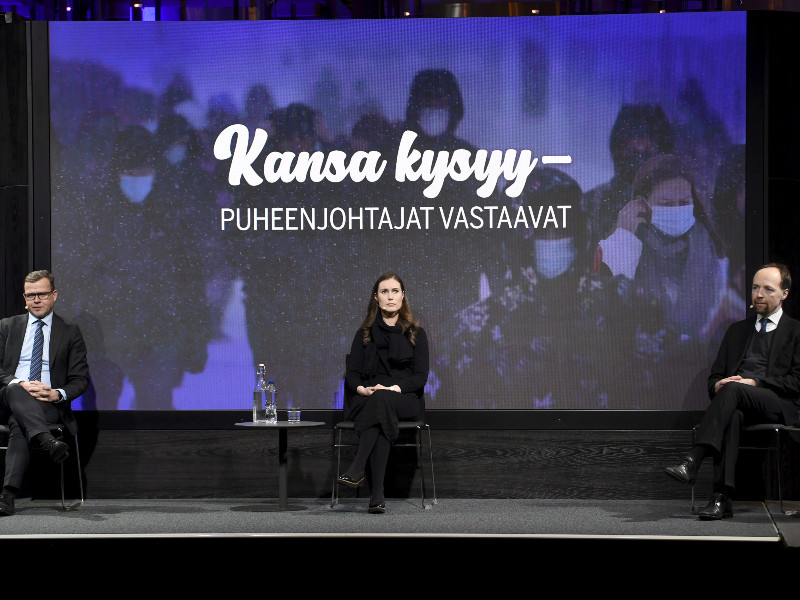 Prime Minister Sanna Marin (SDP) was flanked by Petteri Orpo of the National Coalition (left) and Jussi Halla-aho of the Finns Party (right) at a municipal election debate hosted by Ilta-Sanomat in Helsinki on 12 January 2021. (Vesa Moilanen – Lehtikuva)

THE FINNISH GOVERNMENT is prepared to present a proposal for introducing mandatory coronavirus test at the borders of Finland, Prime Minister Sanna Marin (SDP) stated during a municipal election debate on YLE TV1 on Thursday.

“Mandatory testing at the border, for example, is something we could absolutely pursue, just like demanding a negative test result [from arrivals],” she told.

The government, she added, is prepared to move forward with the idea of mandatory testing as soon as next week, at the start of the spring term in the Finnish Parliament. Calls for mandatory tests have been made especially by Petteri Orpo, the chairperson of the National Coalition.

“We have to be able to close our borders – I mean for the virus, not in the way you think, Jussi,” he quipped at Jussi Halla-aho, the chairperson of the Finns Party. “Forward that amendment. I understood that the prime minister would be ready to forward it. My party at least would be ready to return from the recess to discuss it as soon as tomorrow.

Marin reminded that the government sought to amend the entry regulations in response to the coronavirus outbreak last spring, but its proposal was shot down as “problematic” and “unsalvageable” by the Parliament’s Constitutional Law Committee.

The objective of the rejected proposal was to facilitate inbound travel by allowing entry to passengers who present proof of a negative coronavirus test dated no earlier than three days before arrival.

The Parliament’s Administration Committee, by contrast, demanded last week that arriving passengers be obliged to take a coronavirus test at both internal and external borders, viewing that the demand is justified in the prevalent circumstance to safeguard the critical basic right to health and well-being.

Other European countries, it highlighted, have managed to introduce similar measures.

Its statement was issued in response to a government proposal to amend the act on communicable diseases.

The party leaders also commented on the resumption leisure activities for children and young people in the Finnish capital region. The decision to resume the activities on a limited scope has created friction within the ruling parties and interpreted as an act of defiance against the position of the government.

Marin, for example, stressed recently that now is not the time to ease the restrictions. She reiterated yesterday that the government views that the restrictions should not be relaxed and the situation should be taken seriously due to the more transmissible coronavirus variants.

Halla-aho and Annika Saarikko, the chairperson of the Centre, both stated that the understand the decision made in the capital region.