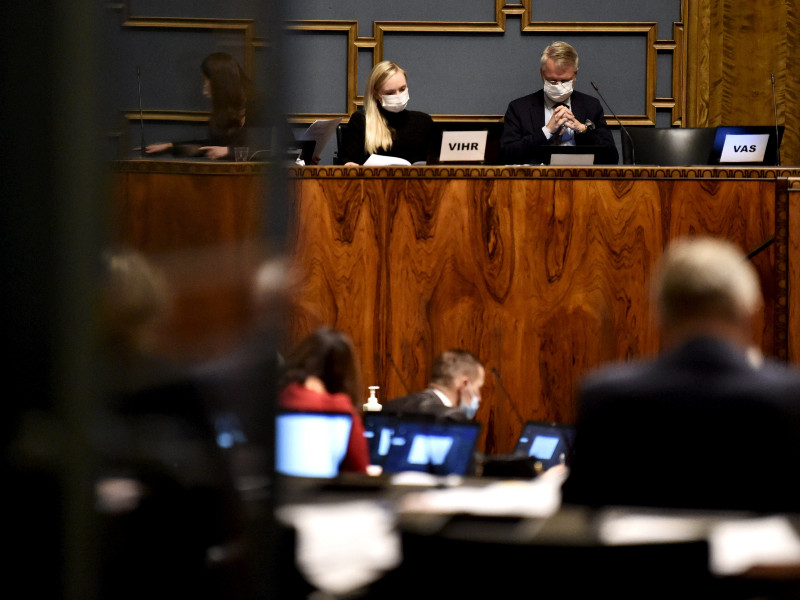 Minister of the Interior Maria Ohisalo (Greens) and Minister for Foreign Affairs Pekka Haavisto (Greens) attending a plenary session in the Parliament House in Helsinki on 21 December 2020. (Jussi Nukari – Lehtikuva)

POPULAR SUPPORT for the Green League has slipped below the 10-per-cent mark for the first time since the summer of 2015, indicates the latest opinion poll commissioned by Helsingin Sanomat.

The daily newspaper reported yesterday that support for the ruling party has fallen by 1.2 percentage points from 11.1 per cent in November to 9.9 per cent in December.

“The final week [of the polling period] dragged down the Greens,” said Sakari Nurmela, the research director at Kantar TNS. “There’s reason to think that the decline in their support is connected to the events related to al-Hol in the Parliament.”

The Parliament’s Constitutional Law Committee ruled earlier this month that Minister for Foreign Affairs Pekka Haavisto (Greens) violated his official duty by planning to re-assign a ministry official over a disagreement about the repatriations of Finnish nationals from a detention camp in al-Hol, Syria. The violation, however, was not serious enough to bring charges against the cabinet member, the committee ruled.

Members of the Finnish Parliament voiced their confidence in the minister by a vote of 101 for and 68 against in mid-December.

Nurmela estimated that the events prompted some voters to withdraw their support for the Green League. Whether or not they will reinstate their support for the party once the political storm has subsided remains unknown, particularly in light of the small share of voter who are absolutely sure of their views.

The Green League held on to the fifth spot in the poll, despite recording the biggest drop out of all political parties in Finland. The Left Alliance, however, gained ground against its coalition partner with a 0.2-point up-tick from 7.5 to 7.7 per cent.

Support for the Swedish People’s Party slipped from 4.4 to 4.3 per cent. The Christian Democrats and Movement Now both saw their popularity creep up by 0.1 points, to 3.8 and 2.3 per cent, respectively.

The five-party ruling coalition thus has the approval of 54.7 per cent of the public, representing a drop of 0.8 points from November.

Kantar TNS interviewed 2,614 people for the poll between 23 November and 18 December.