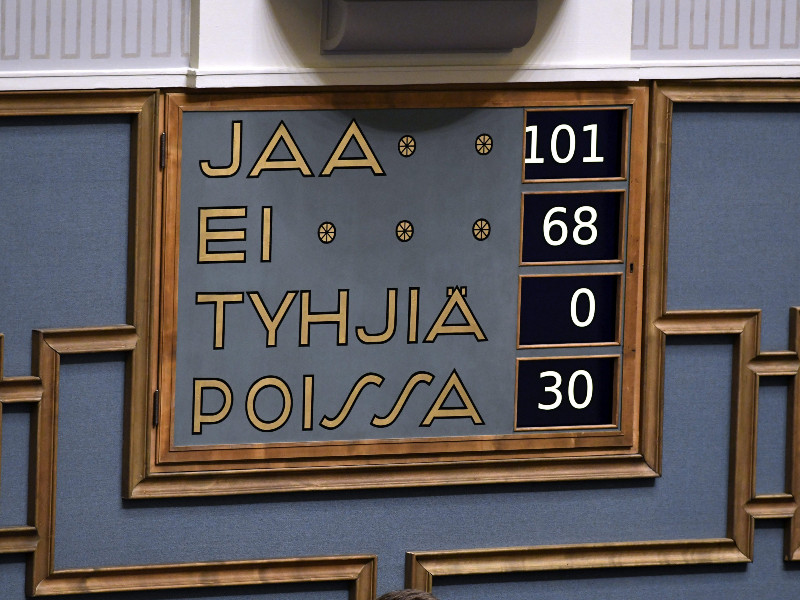 Thirty Members of the Parliament were absent from the vote. (Heikki Saukkomaa – Lehtikuva)

MEMBERS of the Finnish Parliament on Tuesday voiced their support for Minister for Foreign Affairs Pekka Haavisto (Greens) by voting 101 against and 68 for a motion of no-confidence initiated by the Finns Party.

The five ruling parties stood almost unanimously behind Haavisto, with the only vote for the no-confidence motion cast by Hannu Hoskonen (Centre).

All members of the opposition voted for the motion.

The Parliament also decided unanimously not to bring charges against the minister over his actions in the lead-up to repatriating Finnish nationals from al-Hawl, a detention camp for the women and children of the so-called Islamic State in Syria. The Constitutional Law Committee ruled that Haavisto violated his official duty by re-assigning a senior official over a disagreement over the repatriations but not to an extent that warrants prosecution.

The Centre Parliamentary Group issued a statement in conjunction with the vote to express its disapproval of the actions of the Green League.

“The Constitutional Law Committee ruled that Haavisto acted unlawfully, and no unlawful activity is approved by the Centre Parliamentary Group. The ends do not justify the means. Pekka Haavisto has made mistakes and he is responsible for his actions. The political responsibility falls on the Greens,” it read.

Annika Saarikko, the chairperson of the Centre, stated to Helsingin Sanomat that the issue was painful for the Centre. The Green League, she said, acted questionably and problematically in regards to the statement issued by the committee, thereby complicating coalition co-operation and the authority of the committee.

“This was the hardest spot of the electoral term so far for the Centre. It was a question of morals and a reprimand issued by the Constitutional Law Committee.”

She said the parliamentary group had a heated debate on the issue before deciding to essentially vote in favour of continuing in the five-party ruling coalition.

The Green League has come under public criticism for attempting to obscuring the committee statement. The party, in turn, levelled criticism at the committee advisor assigned to the case of Haavisto.