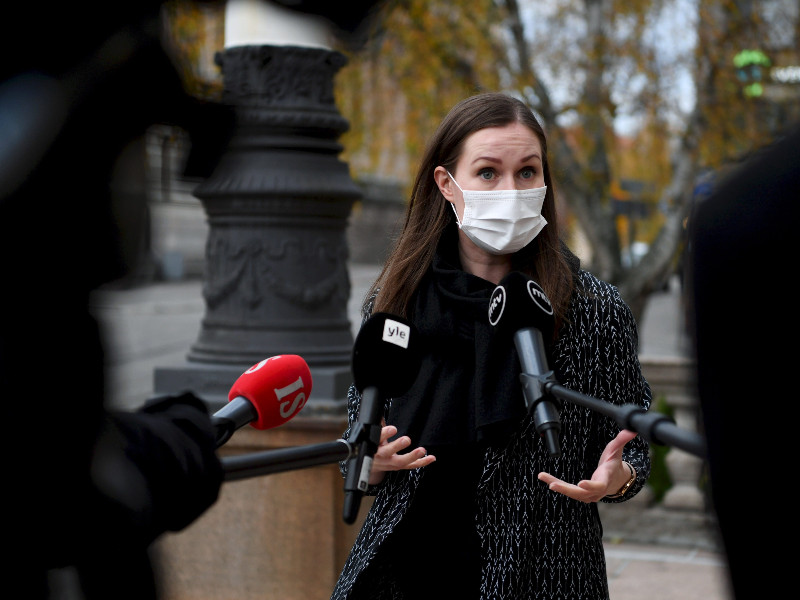 Prime Minister Sanna Marin (SDP) spoke to reporters on the steps of the House of the Estates in Helsinki on Tuesday, 3 November 2020. (Antti Aimo-Koivisto – Lehtikuva)

THE GOVERNMENT of Prime Minister Sanna Marin (SDP) decided not to make any new decisions in response to the coronavirus epidemic in its meeting at the House of the Estates in Helsinki on Tuesday.

“The estimate is that the current recommendations should be enough,” the prime minister was quoted as saying by YLE.

The government convened to review the temporary decrees adopted to slow down the spread of the virus and financial support schemes adopted to help employers and employees to withstand the economic impact of the epidemic. It has already begun preparatory work to extend some of the temporary measures, according to the public broadcasting company.

“These questions are related to easing and supporting the economic situation of business owners, the self-employed and wage earners. These are the kind of issues [we’re talking about], but of course there are other issues, too. I’d consider these the most significant and important,” stated Marin.

She declined to comment more specifically on which of the decrees and support schemes the government intends to extend and how much the extensions are estimated to cost.

Marin also reminded that regional authorities are responsible for much of the work required to successfully fight the epidemic, after the government presented its restrictions and recommendations for different stages of the epidemic.

“We naturally hope the measures will be put to use fully in the regions if need be,” she said.

The Finnish Institute for Health and Welfare (THL) on Tuesday reported that the number of laboratory-confirmed coronavirus cases rose by 237 from the previous day to 16,637. Almost 2,640 of the cases were detected in the latest two-week monitoring period between 18 and 31 October, signalling a drop of 263 from the period between 4 and 17 October.

The death toll from the virus rose by one to 359, while the number of patients in hospital care jumped by 12 to 70 and that of patients in intensive care by three to 13.

Marin reminded before the meeting that there is no room for complacency: “We can’t heave a sigh of relief, but we have to take the situation seriously – and the fact that the situation may worsen quickly also in Finland.”

THL, the Ministry of Social Affairs and Health and Regional State Administrative Agencies will convene today to determine which stage of the epidemic each region is currently in.

Regions deemed to be in the worst, spreading stage of the epidemic have been instructed to, for example, weigh up the possibility of suspending free-time activities, shifting to remote teaching and calling off organised events.