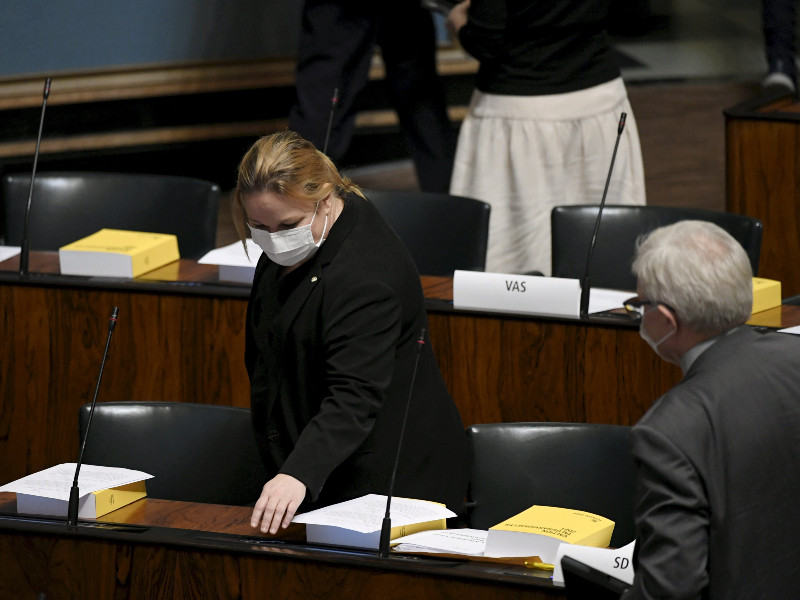 Minister of Family Affairs and Social Services Krista Kiuru (SDP) was photographed with her hand over the buttons in front of hear seat in the session hall of the Finnish Parliament on Wednesday, 14 October. (Markku Ulander – Lehtikuva)

MINISTER of Family Affairs and Social Services Krista Kiuru (SDP) received the confidence of her fellow lawmakers by a vote of 106 for and 79 against in the Parliament House on Wednesday.

The outcome of the vote was unsurprising as all representatives of the five ruling parties declared their support for the cabinet member, thus thwarting the motion of no-confidence orchestrated by the National Coalition.

The opposition party filed the motion in an attempt to challenge the decisions made by the government on communicating about the use and benefits of face masks during the state of emergency. It argued, for example, that a study about the benefits of face masks was subjected to political steering, which did not reflect the best available research data, in a bid to mislead the public and questioned the way in which coronavirus-related instructions and orders had been communicated by Kiuru.

Members of the National Coalition and Finns Party all voted for the no-confidence motion, as did all but one member of the Christian Democrats.

Prime Minister Sanna Marin (SDP) on Wednesday viewed that the no-confidence vote will leave no friction between the ruling and opposition parties, which convened later yesterday to discuss possible amendments to the act on communicable diseases.

“The thinking can’t be that if the opposition makes a motion of no-confidence or disagrees on one issue we can’t look for common ground on other issues,” she was quoted as saying by YLE.

She also estimated that the government has answered the questions asked about the mask recommendation.

“Experts weren’t of the view in the spring that a general mask recommendation would be an effective measure. The World Health Organisation (WHO) has since changed its own recommendations, and the government has changed its own stance whenever new information has become available,” she highlighted.

Petteri Orpo, the chairperson of the National Coalition, stated that the discussion surrounding the no-confidence motion was necessary despite the outcome of the vote.

“We think it’s important that we’ve not had this discussion. Now that the ruling parties have firmly given their confidence to minister Kiuru, they have the responsibility to live up to it by telling how things are firmly and honestly,” he said to the public broadcaster on Wednesday.

He also commented briefly on the negotiations between the ruling and opposition parties on amending the act on communicable diseases in order to augment the tools available to the government to combat epidemics.

“It has to be a certainty that those rights aren’t abused by anyone in more uncertain times,” underlined Orpo.