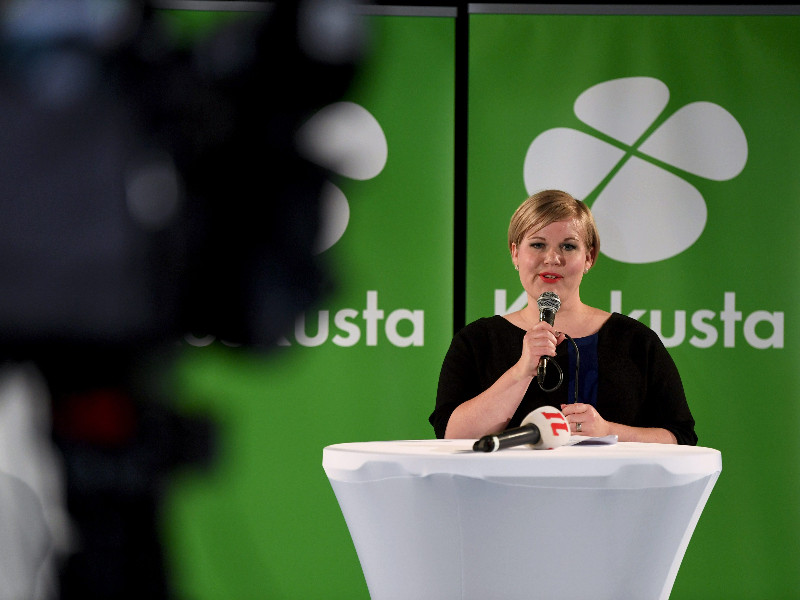 Minister of Science and Culture Annika Saarikko (Centre) spoke to the media at a news conference in Oulu on Saturday, 5 September 2020. (Antti Aimo-Koivisto – Lehtikuva)

THE CENTRE PARTY on Saturday elected Minister of Science and Culture Annika Saarikko as its new chairperson.

The leadership election was decided in the first round of voting, with the media favourite receiving 1,157 of the votes cast at the party conference and bettering both the incumbent candidate, Katri Kulmuni (773 votes), and Petri Honkonen (308 votes).

The leadership bid has been described as a calculated risk by Saarikko.

The Centre appears divided in the midst of one of the worst popularity crises in its history, polling at around the 11-per-cent mark in all major polls. Kulmuni not being offered the opportunity to lead the party into a single election and the party being part of a leftist coalition government have been cited as factors that have created friction in the ranks of the centre-right party.

Analysts have also suggested that the very future of the party could hinge on the municipal elections – traditionally its bread and butter – scheduled to take place next spring.

“There’s supposed to be some variance in a government. It’s a question of whether the tensions become divisive or so-called creative tensions. The Centre and Social Democrats’ strongest common point is employment; our objectives are the same and compatible,” she commented at a news conference.

The government, she envisioned, should utilise five to seven indicators to monitor the economic and employment situation, namely the employment rate, unemployment rate, gross domestic product, foreign trade, public debt, and investments in research and development.

“Despite the experience I have, I’ve yet to take part in a single easy budget session,” she said about the upcoming budget talks between the ruling parties.

“I believe Finns appreciate the kind of approach that’s focused on solutions and tries to find the smallest common denominators. I’m drawing attention to this because of the unusually difficult situation in Finland.”

The National Coalition emerged from its party conference in a different mood: bullish about its chances to topple the ruling coalition. Petteri Orpo was re-elected uncontested for another two-year term at the helm of the opposition party, with the deputy duties being assigned to Antti Häkkänen, Elina Lepomäki and Anna-Kaisa Ikonen.

“This is the group that will lead the election campaigns of the National Coalition,” announced Orpo. “If we work together, pull in the same direction, no one can stop us. We’ll oust the government.”