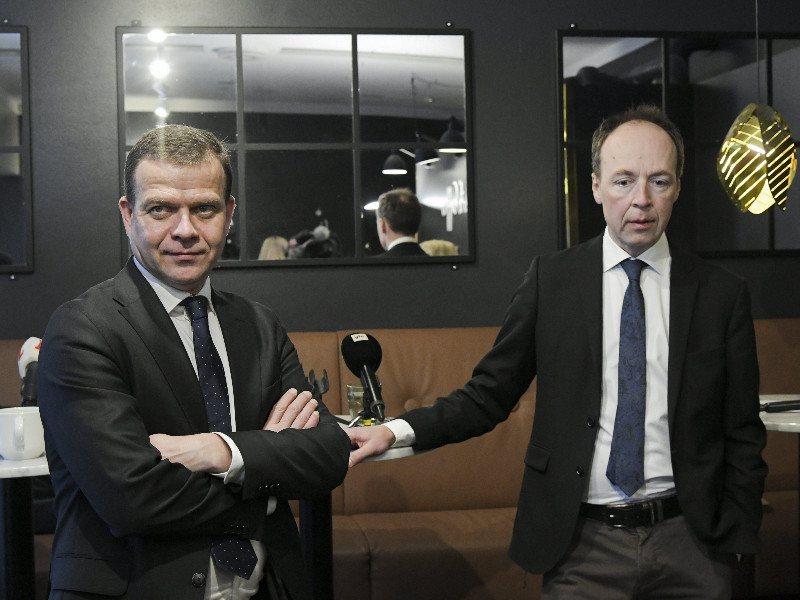 Opposition leaders Petteri Orpo of the National Coalition (left) and Jussi Halla-aho of the Finns Party have expressed their disappointment with the compromise found on the EU’s 750-billion-euro recovery fund. (Markku Ulander – Lehtikuva)

FINNISH OPPOSITION leaders have wasted no time in picking holes in the compromise reached yesterday morning over a 750-billion-euro fund to support the economic recovery of the EU.

Petteri Orpo, the chairperson of the National Coalition, on Tuesday said the agreement struck by the 27-country bloc after four days of intense negotiations warrants thorough scrutiny, but branded it a disappointment for Finland.

“It is in Finland’s best interests that the EU economy gets support as soon as possible to start its recovery from the coronavirus crisis. That’s why the agreement in itself is good news, but, looking at the entire end result, it is a disappointment,” he commented on Twitter.

The European Commission originally proposed that 500 billion of the recovery funding be disbursed in grants and 250 billion in loans to member states economically affected by the crisis. Finland, along with the frugal four of Austria, Denmark, Sweden and the Netherlands, demanded that the fund be more loan-oriented.

The compromise found yesterday will see 390 billion of the 750 billion euros paid out in grants and 360 billion in loans.

“Although Finland succeeded in putting more emphasis on loans, the cuts were made specifically in targets related to development and reforms, such as climate-change adaptation and the Horizon 2020 programme,” reminded Orpo.

“I think that’s very bad for Finland and Europe.”

While Finland appears to take on a greater share of the costs of the instrument, its returns remain slim, added Orpo.

“The frugal four got its membership fee rebates, which add up to hundreds of millions annually. What did Finland get? One hundred million for regional development. I’m perplexed by the negotiating strategy, by what exactly went down,” he critiqued, admitting that the negotiations were evidently difficult.

Orpo also found positives in the compromise, such as the smaller share of grants and preservation of agricultural subsidies, but questioned whether they came at too high a cost.

While the Finnish government, he pointed out, has communicated that the compromise makes the funding conditional on compliance with the principles of the rule of law, certain eastern member states have interpreted the compromise differently.

“We have to get clarity to this, to how it really is. It seems that the rule-of-law principle is fairly diluted in light of the goals of Finland,” said Orpo.

The Finns Party, in turn, remains opposed to the whole idea of a union-wide recovery fund. Chairperson Jussi Halla-aho on Tuesday characterised the fund as a “completely immoral support instrument” that pushes the bloc towards a “debt union”.

“It’s an attempt to use income transfers to solve certain member states’ long-standing structural problems and problems caused fundamentally by their own economic policies,” he told Helsingin Sanomat.

Prime Minister Sanna Marin (SDP) on Tuesday declared that the compromise reached in the marathon summit is good for Finland.

“In the recovery instrument, the share of grants was reduced substantially in line with our objectives – by more than 100 billion euros. The need to clearly limit total exposures was written down to the compromise at the request of Finland,” she listed on Twitter.

Marin added that it is pivotal that the use of funding was made conditional on compliance with rule-of-law principles.

“A third of all funding must be spent on climate actions. Research funding will increase by almost a quarter from the present level. This is a sustainable road forward,” she stated. “Finland, for the first time ever, received 100 million euros in additional funding for sparsely populated areas in northern and eastern Finland.”