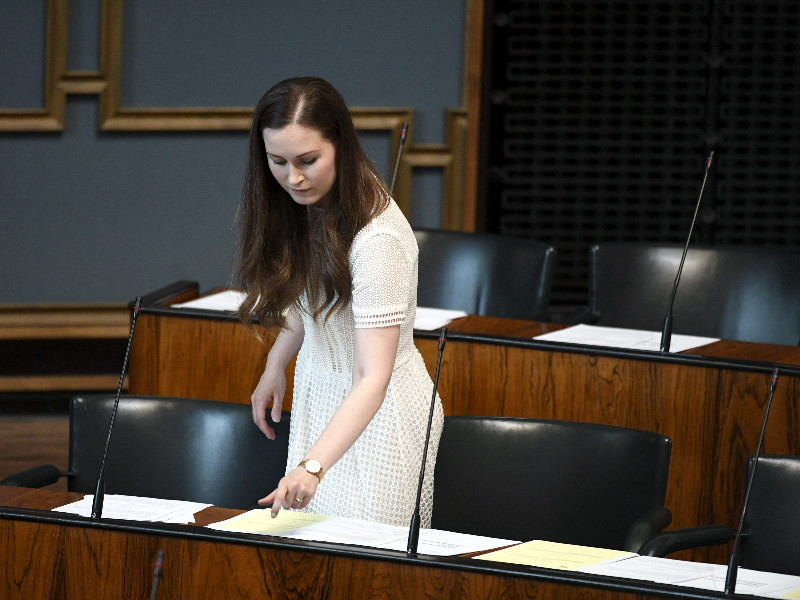 The Social Democratic Party has had its first wobble under the leadership of Prime Minister Sanna Marin (SDP), according to a new poll by YLE. (Vesa Moilanen – Lehtikuva)

POPULAR SUPPORT for the Social Democratic Party has fallen after rising for six months, shows the most recent opinion poll commissioned by YLE.

The Finnish public broadcasting company reported yesterday that support for the ruling party dipped by 1.3 percentage points to 21.9 per cent between May and June, signalling the first negative change in the tenure of Prime Minister Sanna Marin (SDP).

The Social Democratic Party, regardless, continues to poll over four points higher than in the latest parliamentary elections and holds a healthy three-point lead over both the Finns Party (18.1%) and National Coalition (17.9%).

“Support for the SDP has started to drop off a bit. It remains to be seen how permanent it is,” Tuomo Turja, the managing director of Taloustutkimus, told YLE.

Taloustutkimus interviewed 2,451 people for the poll between 3 and 30 June.

Support for the Green League continued on its downward trajectory by falling by a point to 10.9 per cent, its lowest level since February 2016. The ruling party won 11.5 per cent of the vote in the latest parliamentary elections and saw its popularity peak at 14.3 per cent roughly a year ago, after its reins were handed to Minister of the Interior Maria Ohisalo (Greens).

Turja said the Green League has lost core supporters to the Social Democrats, Left Alliance and National Coalition. “The decrease in support stems from under 35-year-old men and women. The leavers include students and people living in the congested parts of Finland,” he said.

The Left Alliance, for example, has benefited from the haemorrhaging of its coalition partner by gaining a point to 8.9 per cent.

The Finns Party, thereby, seems unaffected by the public controversies linked to a misogynous publication by its think tank, Suomen Perusta, and tweet by Ano Turtiainen (PS), a first-term Member of Parliament from South-east Finland.

The stagnant situation, however, could be a sign of changes to come, according to Turja.

“The mood is expectant,” he said. “The coronavirus restrictions are being relaxed and we’re hopefully moving toward our normal lives. The budget session will take place in the autumn. It’s easy to see that the economic outlook isn’t exactly bright. All of this can have an impact on the approval ratings in the autumn.”