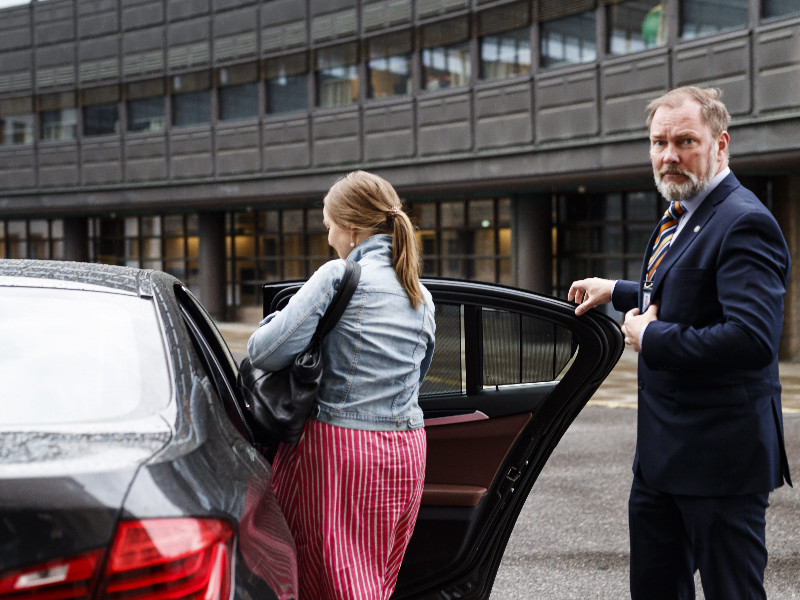 Katri Kulmuni, the chairperson of the Centre, was photographed leaving the Parliament House on Friday, 5 June, after announcing she will step down as minister of finance. (Roni Rekomaa – Lehtikuva)

THE CHAIRPERSON of the Centre, Katri Kulmuni, has quelled rumours that the agrarian party is considering abandoning the government following her decision to step down as minister of finance over a scandal revolving around her use of public speaking training.

The rumours intensified after the party announced it will postpone its announcement on who will step into the shoes of Kulmuni from Sunday to Monday.

“The Centre will make its decisions placing priority on the interests of Finns and Finland. We’re living in exceptional times, [and] what we need now is stability in decision-making,” Kulmuni stated on Twitter on Sunday.

“I said the Centre will stay in the government already on Friday,” she reminded. “The new minister of finance will be selected tomorrow.”

The nominee will be decided by the governing bodies of the party in a meeting scheduled to start at 9am on Monday. Kulmuni will then be relieved from her ministerial duties and the new minister – or ministers, if the party decides to carry out a more thorough re-shuffle – appointed by President Sauli Niinistö.

Kulmuni announced her decision to step down but continue at the helm of the party after a few-day outrage kindled by a report that she had spent around 50,000 euros of taxpayer money on public speaking and communication training provided by Tekir, a private crisis communications and reputation management consultancy based in Helsinki.

The report was published on Tuesday by Suomen Kuvalehti.

Kulmuni on Wednesday attempted to mitigate the situation by promising to reimburse the ministries for the training costs. Helsinki Police Department on Friday said it will conduct a preliminary assessment of whether the procurements could constitute misuse of public funds.

Helsingin Sanomat’s Marko Junkkari on Friday pointed out in his analysis that the timeline suggests the training sessions were not related exclusively to the ministerial duties of Kulmuni.

Documents from the Ministry of Employment and the Economy, he highlighted, reveal that the bid to provide the services was submitted on 4 August, two days after the then minister of economic affairs had launched her campaign to become the next chairperson of the Centre. The procurement agreement was signed on 8 August, two days before the first leadership debate between Kulmuni and Antti Kaikkonen.

The dates raise suspicions that the training was designed specifically for the leadership race, particularly because the bid stated specifically that one of the objectives was to coach the minister for “duels”.

Kulmuni was elected as the chairperson of the Centre on 7 September.

Suomen Kuvalehti also wrote that one of the training sessions took place on 3 December, one of the most dramatic dates in the recent political history of Finland. While news outlets provided minute-to-minute updates about the resignation of Prime Minister Antti Rinne (SDP), Kulmuni apparently spent two hours honing her communication skills.

Her aid told the weekly newspaper that the purpose of the session was to prepare her for her appearance on YLE’s A-studio on 3 December. Kulmuni commented on the resignation on the current affairs show in her capacity as the chairperson of the Centre.

“Drawing a line between my duties as a minister and party leader is extremely difficult, almost impossible, in many situations. The truth probably is that I’m always representing both simultaneously, whatever the situation,” Kulmuni stated on Friday.

“I have to accept the political responsibility, even though I wasn’t aware of all the procurements related to the issue or didn’t order or acquire them. Even I didn’t find out the total sum spent on all this until this week,” she added.