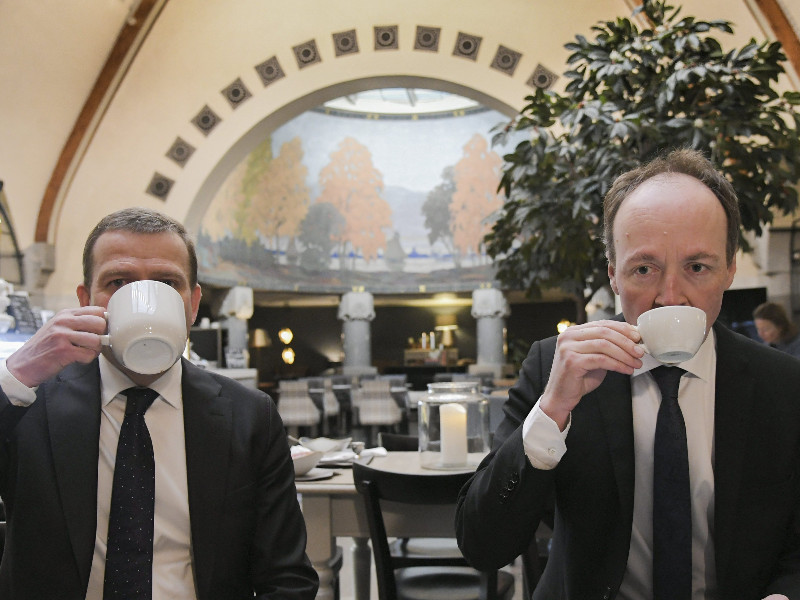 Petteri Orpo of the National Coalition (left) and Jussi Halla-aho of the Finns Party were photographed at an event of political journalists in Helsinki on 11 March 2020. Both opposition parties have seen their popularity drop during the coronavirus pandemic. (Markku Ulander – Lehtikuva).

THE SOCIAL DEMOCRATIC PARTY has all but erased the poll lead of the Finns Party, shows the latest opinion poll commissioned by YLE.

The public broadcasting company revealed last week that support for the ruling party has surged by 3.0 percentage points to 19.6 per cent, while that for the right-wing opposition party has fallen by 2.4 points to 20.0 per cent since February.

A similar result was yielded earlier this month in a poll commissioned by Alma Media: the Social Democrats recorded a surge (4.4pp) and the Finns Party a drop (1.6pp) in popular support to 21.1 and 20.1 per cent, respectively.

The results of the two polls differ for an obvious reason, according to Tuomo Turja, the research director at Taloustutkimus.

Interviews for the Alma Media poll were conducted between 20 and 27 March. Interviews for the YLE poll, in turn, were carried out partly prior to the declaration of a state of emergency and adoption of stringent measures to curb the spread of the new coronavirus in Finland –  between 4 March and 7 April.

“The week-specific results tell that the SDP has been the most popular party in Finland since [23 March],” Turja told YLE.

The Finnish government declared a state of emergency over the coronavirus pandemic on 16 March.

The results thereby suggest the public is at least somewhat satisfied with the measures introduced by the government to combat the epidemic, which is reflected especially in the support rating of Prime Minister Sanna Marin’s Social Democrats.

The ruling party, however, has made its gains largely at the expense of its coalition partners, highlighted Turja.

“The Finns Party’s decline in support is about some of the party’s supporters moving to the spectator stands,” he said. “The Finns Party is still by far the most popular party among blue-collar workers.”

There were no major swings in the support ratings of other members of the five-party coalition: The Green League saw its popularity drop by 0.5 points to 12.0 per cent, while the Left Alliance registered an equivalent up-tick to climb to 7.9 per cent. Support for the Centre and Swedish People’s Party remained unchanged at 12.4 and 4.1 per cent, respectively.

The National Coalition fell by 0.4 points to 17.6 per cent, while the Christian Democrats recorded an up-tick of 1.0 point in support to 3.9 per cent.

Taloustutkimus interviewed a total of 3,921 people for the poll, with 2,614 of them disclosing their party of choice.