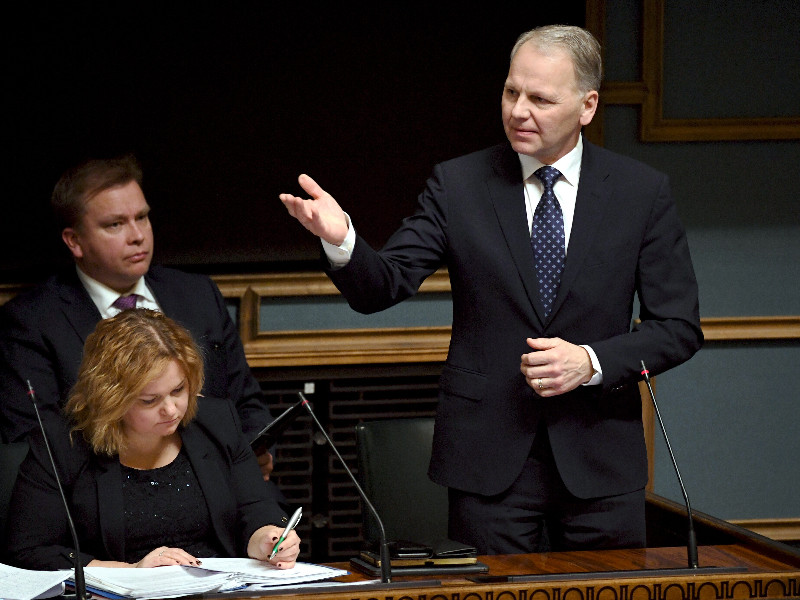 Minister of Agriculture and Forestry Jari Leppä (Centre) had the floor during a question-time debate in the Finnish Parliament in Helsinki on Thursday, 20 February 2020. (Jussi Nukari – Lehtikuva)

THE BUDGET SUMMIT of the European Union stirred up concerns during the question-time debate in the Finnish Parliament on Thursday.

Janne Sankelo (NCP) asked the Finnish government to elaborate how it intends to foster the confidence of agricultural business owners in the future amid reports that it is about to lose around 310 million euros in agricultural subsidies from the EU.

“We’re talking about the livelihood of farmers and vitality of the countryside. How will the government make sure farmers can have faith in the future of food production?” he asked.

Minister of Agriculture and Forestry Jari Leppä (Centre) responded to Sankelo by saying that government has not adjusted its approach from the previous electoral term, when the ruling coalition included the National Coalition.

“We want to reach as good a result as possible in the negotiations. We won’t settle for anything else,” he said.

“Farmers are constantly faced with new obligations from the viewpoint of the climate and environment. It’s obvious that we can’t slash their funding as their obligations increase,” added Leppä.

Minister of Finance Katri Kulmuni (Centre) outlined that the so-called second pillar of the countryside is a priority for the government, adding that if the opposition is truly concerned about domestic farmers, it should be more supportive of the government.

Prime Minister Sanna Marin (SDP) said in Brussels on Thursday that Finland considers it important that the funding for rural development is maintained as part of a “moderate whole”.

Finland, however, appears to be on the losing side of the battle, as the baseline proposal discussed at the budget summit would cut the development funding by 25 per cent and the subsidies disbursed mostly to large farms by 10 per cent from the current level. Also its proposal would have cut the development funding by around 20 per cent to 80 billion euros.

Marin stated to STT that some kind of a “special arrangement” could be found.

The country has also campaigned for making subsidies conditional on member states’ compliance with the principles of rule of law.