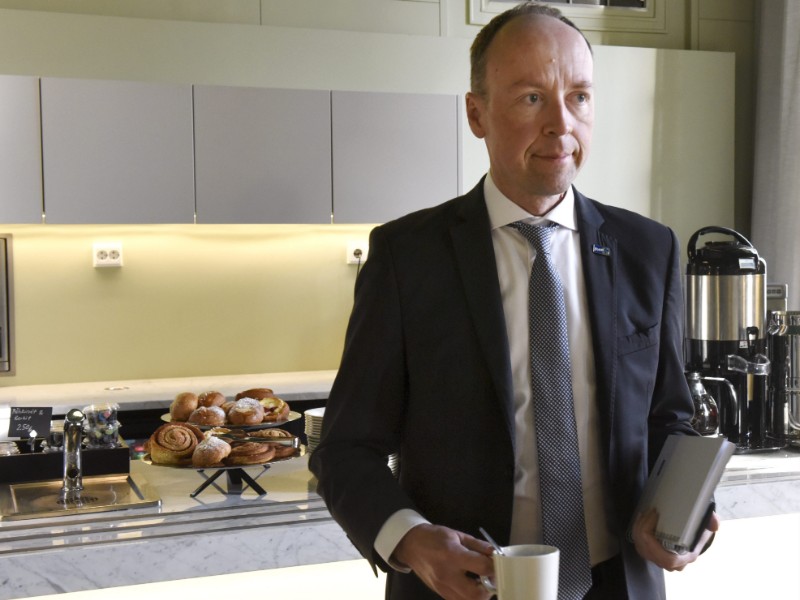 Jussi Halla-aho, the chairperson of the Finns Party, has succeeded in boosting the popularity of the right-wing opposition party, shows a new poll by YLE. (Heikki Saukkomaa – Lehtikuva)

THE FINNS PARTY has continued to domineer opinion polls in Finland.

YLE on Thursday revealed that its latest poll indicates that the populist right-wing opposition party has dramatically widened its advantage over other parties in the country, after seeing its popularity increase by 2.1 percentage points to 23.0 per cent since early October.

The party has gained popularity especially in small cities and Helsinki, according to the public broadcasting company.

“In terms of occupational groups, blue-collar workers clearly stand out. Also pensioners have emerged as another [major supporter] group,” Tuomo Turja, the managing director of Taloustutkimus, commented to YLE.

“The Finns Party has made gains steadily at the expense of the Social Democrats, Centre and National Coalition,” he added.

The Finnish market research company interviewed a total of 3,414 people for the poll between 2 October and 5 November.

The National Coalition currently trails the Finns Party by 4.7 percentage points, after seeing its popularity rise by 0.2 percentage points to 17.3 per cent. The Social Democratic Party, in turn, took a dramatic tumble in the poll, falling from 15.6 to 13.9 per cent and losing its status as the most supported ruling party to the Green League (14.2%).

The Centre and Left Alliance both continue to poll at about the same level as one month earlier, at 12.9 and 7.9 per cent, respectively.

Turja told YLE that the Social Democratic Party is haemorrhaging clearly more support than other parties not only to the Finns Party, but also to the so-called Sleeper Party – that is, the group of abstaining voters.

“The groups that are providing the gains for the Finns Party, meaning workers and pensioners, are causing the decline for the Social Democrats,” he said.

The Social Democratic Party has hurt its popularity with its statements on labour market issues and the controversies surrounding Posti and Veikkaus, a group of political journalists estimated on YLE TV1 on Thursday.