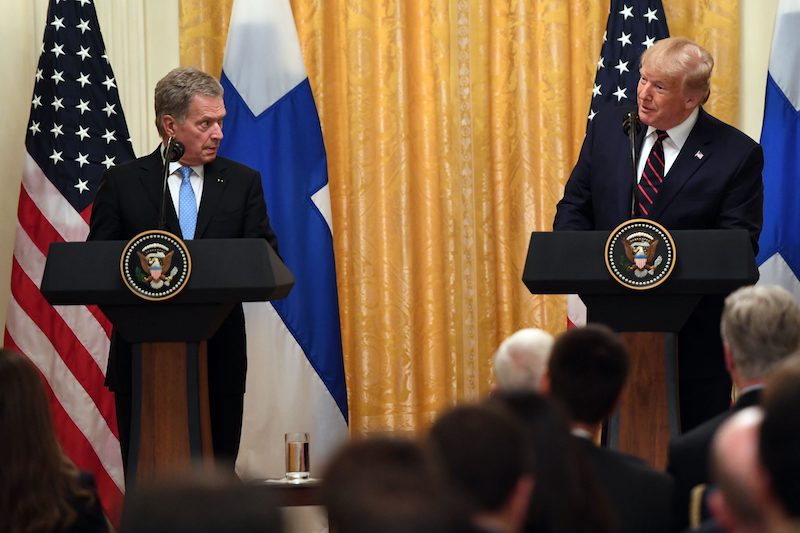 With all due respect, Your press conference with the president of the United States was perplexing, to say the least.

First, you shouldn’t have been there at all. Why give an opportunity to Donald Trump to boost his image by receiving a world leader. But once you were there, you had an excellent opportunity to promote Finland in front of the world. Instead, you became an extra in a Trump reality TV episode and a sidekick in an internal dispute of a president dragging himself and his country through the mire.

Regarding your speech, mentioning topics such as the climate, the Arctic, transatlantic relations, etc. will not have any effect on the Trump administration and even though the intent is appreciated, the delivery was not without problems.

Transatlantic relations may have been healthy and useful long ago, but what has remained now is the US assuming Europe to be a collection of vassal states that should obey and follow the US foreign policy into conflict and intervention after another, and pay for protection, like businesses used to do with Mafia mobsters. I am sorry to say that you are wrong to assume that Europe needs the USA. Since the collapse of the Soviet Union, all USA has brought to Europe has been harm and trouble. US has dragged Europe into many unnecessary conflicts, cold and warm wars, economic sanctions, arms races, and recently trade wars which have benefited the US only. Undoubtedly, the United States would love to see EU dismantled and Euro gone, to have European states as dependent on itself as possible. Europe would be much better off without the interference and destructive foreign policy of the United States.

You said, “We share the same values, democracy, human rights, rules-based order.” This is not true. The United States is a country where police officers shoot and kill three people per day with impunity, most of them black, many of them unarmed and innocent. This is a country where more than 3 200 people, again mostly blacks and Latinos, are imprisoned for life without parole, for non-violent crimes, sometimes as minor as shoplifting.

This is a country where when people get hurt, their first request to the helpers is that “please do not call an ambulance” because they can not afford to pay for the emergency health care. Internationally, the United States has left many multilateral agreements and broken any rule contradicting its interests openly destroying the rule based international order.

“Today, greatness is not in the land area,

population, size of the economy or military power,

but in values, equality, social security, education and welfare.”

You mentioned that you visited the museums of American history, African American History and the museum of Indigenous People, and continued with “You have a great democracy, keep it going!”

I am amazed that visiting those museums instead did not enlighten you to the fact that the United States is built on the graves of the indigenous people and the sweat and pain of the African slaves, kidnapped from their homes, put in chains and abused for over a century.

Not only those nations have never been compensated, but also the abuse and discrimination continue to this day. Today, the rights of blacks and minorities to vote is stolen from them by all sorts of criminal and evil plots, form gerrymandering, to ID and registration rules. Blacks and Hispanics are packed in prisons with felony charges - which strips them of the right to vote for life - for crimes that the white people would get a slap on the wrist.

The United States is a pathological elitocracy, where election campaigns are so costly, that candidates and politicians are required to sell their soul to the devil of lobbyers before they run for any office and both the Senate and the Congress are millionaires clubs. This is a country with only two parties, both financed and controlled by Wall Street and big corporations.

Did you know that both Wyoming, the smallest state, and California, the largest state - which would be the 5th largest economy in the world if it was an independent country - have two senators in the United States Senate, comparatively giving a Wyoming citizen 67 votes in each election?

Is this system that made Donald Trump president the democracy you want them to keep up?

You may be proud of your “You have a great democracy, keep it going” advice, which you said was inspired by your visit to those museums and the Arlington Cemetery where among others, US soldiers killed in foreign conflicts such as Vietnam, Korea and Iraq are buried. I wonder how those places underscore American democracy? If anything, these are all physical evidence to the brutal history of a country which admires violence and killing. The United States has invaded or militarily intervened in 84 of the 193 countries recognised by the United Nations, leaving hundreds of civilian casualties behind for every American soldier killed in action.

Maybe next time you should visit the mass graves in Vietnam, where 2 million Vietnamese civilians are buried. Even today, children are born in Vietnam with deformities and poisoned blood resulting from the chemical weapons Americans used to destroy 4.5 million acres of forest, and indiscriminately killing 400 000 Vietnamese.

The Korean war killed 5 million people, half of them civilians. The hundreds of thousands of graves of poor soldiers you saw in Arlington killed in those wars is sad evidence of the US interventionism and foolishness, which continues to this day. Those young people were not killed defending their country but were sacrificed for imposing US imperialism and capitalism onto other nations.

Finally, you said you found the discussions giving a lot to your “little” country. Today, greatness is not in the land area, population, size of the economy or military power, but in values, equality, social security, education and welfare. Whatever we think of the methods to conduct the surveys, Finland has been named as the happiest, least corrupt, most progressive, freest, safest, most transparent and the most stable democracy with the best governance in the world. This is what greatness means in essence. You were representing a country which offers free high-quality education and health care to all its citizens. A country where the police use their firearms only about ten times a year, and the judiciary is fair and independent. You were representing a country with the freest and most reliable elections in the world where everyone has one vote, and human rights are genuinely honoured and appreciated. You were representing a civilised nation, and the man who stood beside you was representing everything else from nepotism, misuse of power, obstruction of justice, racism, misogyny and bigotry to lies and scandals.

In fact, you were the leader of a superpower, standing beside a little conman, leading a divided and confused little country with severely compromised values and ethics.

Trump may have invited you there for advancing his plots with pressuring Huawei and more access to the arctic. How could people forget all that Edward Snowden exposed just a few years ago? It is ridiculous for the United States, who’s NSA has been monitoring every communication of people and even leaders of allied nations such as Angela Merkel to be “concerned” about the security of 5G. Their only worry is most probably that they will not be able to spy on people themselves if China owns the technology. As for the arctic, beware, he will next offer to buy Lapland off your hands.

I hope you never visit the White House under this president again, but if you do, please prepare, be proud of your country and stand tall as you are the leader of a great democracy.