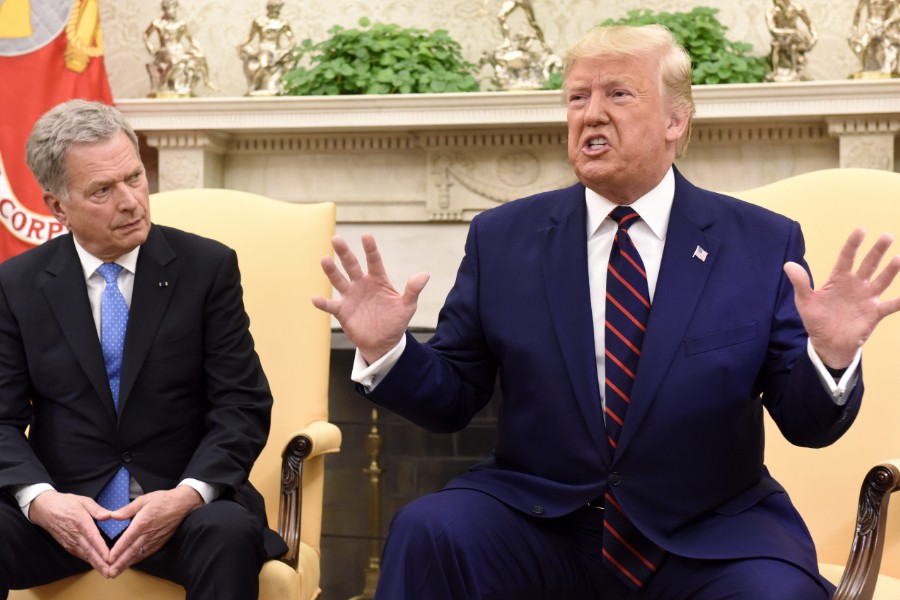 President Sauli Niinistö (left) and Donald Trump (right) in a joint media availability in the Oval Office of the White House in Washington DC, the US, on Wednesday, 2 October 2019. (Heikki Saukkomaa – Lehtikuva)

Niinistö, however, was forced into the role of a spectator for much of the joint media availability that followed the meeting, as his counterpart launched into a 15-minute monologue about corruption in the media and the malfeasance accusations levelled against him.

“You’re just lying. You should be ashamed,” Trump stated to the reporters in attendance.

Niinistö told Finnish reporters after the eventful session that the bilateral discussions had dealt with, for example, the relations between Europe and the United States.

“We heard some rather harsh words, as we did also in the press event. That’s why I decided beforehand that I’d bring up the topic of transatlantic relations. At least he didn’t reject the views I expressed in that regard,” he said.

A former minister of finance and vice president at the European Investment Bank (EIB), Niinistö said he also drew attention to the significance of the US dollar as a reserve currency.

“I shared the thoughts of an old finance professional on whether it’s appreciated that the dollar is the reserve currency of the world. It’s a massive thing for the whole of America and the American economy. It’s strength and power to control the world’s reserve currency,” he explained.

Europe, he assured, is not intent on de-stabilising the system.

Niinistö said Trump arrived at the meeting better prepared than two years ago, when he abruptly announced that Finland has decided to acquire F-15 fighter jets from Boeing, a United States-based designer and manufacturer of aircraft.

“He was oriented,” described Niinistö.

His working visit honours the 100th anniversary of diplomatic relations between Finland and the United States.