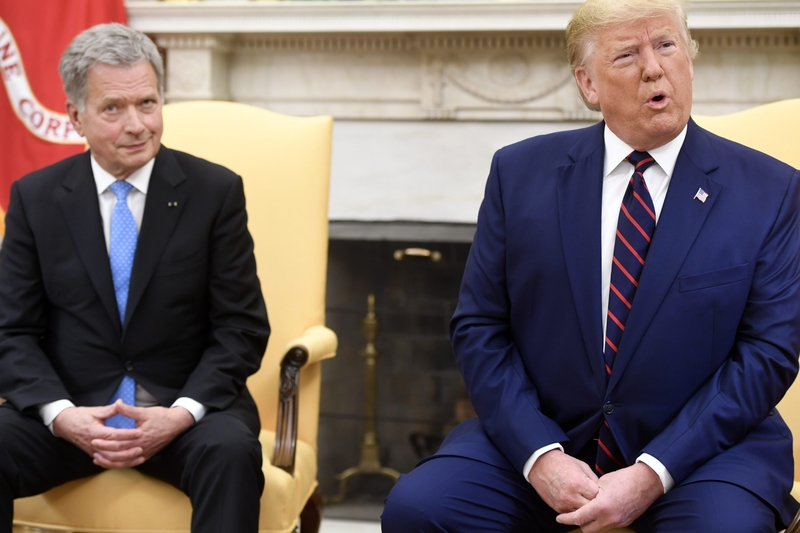 Trump and Niinistö at the press conference on Wednesday (Image Credit: Lehtikuva)

TRUMP'S PRESS CONFERENCE WITH PRESIDENT NIINISTÖ on Wednesday evening sparked a number of commentaries, with much of the session consisting of Trump railing against the US Democratic Party, who launched impeachment proceedings against him last week. However, what happened during Trump and Niinisto's meeting prior to the press conference is also sparking speculation.

Prior to the presser, which took place in the White House, Trump and Niinistö held a private meeting, during which they supposedly covered a number of geopolitical topics. However, some on social media have pointed out that it seems that Trump may have spent the entire session tweeting about domestic strife back home, rather than talking with the Finnish president.

In the two hours leading up to the press conference, when Trump and Niinistö were meeting, Trump sent out a total of 10 tweets. The Tweets were entirely focused on the impeachment proceedings, featuring several expletive-laden comments in which he accused Democratic leaders and the US press of treachery, incompetence, and "wasting everyone's time and energy on BULLSHIT".

You can see some of the tweets below.

Adam Schiff should only be so lucky to have the brains, honor and strength of Secretary of State Mike Pompeo. For a lowlife like Schiff, who completely fabricated my words and read them to Congress as though they were said by me, to demean a First in Class at West Point, is SAD!

The Do Nothing Democrats should be focused on building up our Country, not wasting everyone’s time and energy on BULLSHIT, which is what they have been doing ever since I got overwhelmingly elected in 2016, 223-306. Get a better candidate this time, you’ll need it!

Nancy Pelosi just said that she is interested in lowering prescription drug prices & working on the desperately needed USMCA. She is incapable of working on either. It is just camouflage for trying to win an election through impeachment. The Do Nothing Democrats are stuck in mud!

Now the press is trying to sell the fact that I wanted a Moat stuffed with alligators and snakes, with an electrified fence and sharp spikes on top, at our Southern Border. I may be tough on Border Security, but not that tough. The press has gone Crazy. Fake News!