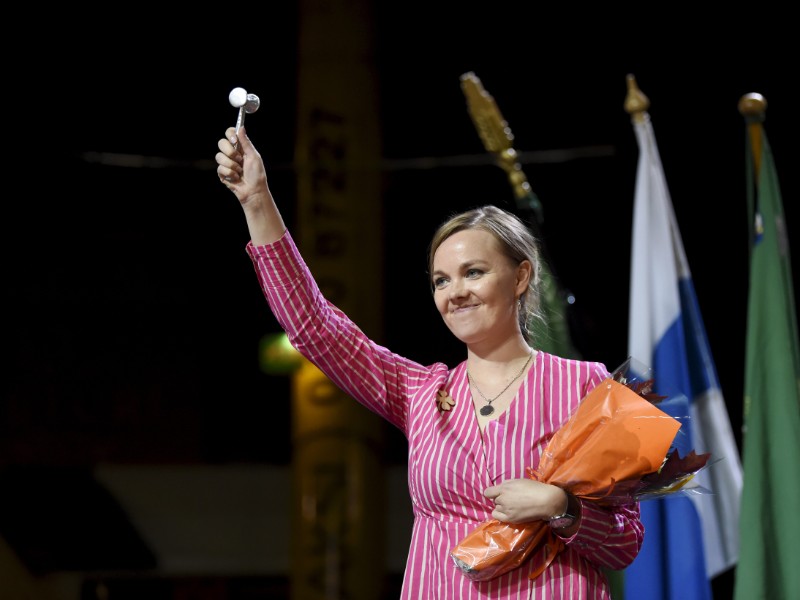 Minister of Economic Affairs Katri Kulmuni (Centre) waved a gavel she received from her predecessor as the chairperson of the Centre Party, Juha Sipilä (Centre), in Kouvola on Saturday, 7 September 2019. (Antti Aimo-Koivisto – Lehtikuva)

MINISTER of Economic Affairs Katri Kulmuni has been elected as the new chairperson of the Centre Party.

Kulmuni, a 32-year-old second-term Member of the Finnish Parliament from Tornio, Northern Finland, received 1,092 of the 1,921 votes cast in the leadership election held at an extraordinary party conference in Kouvola, Southern Finland, on Saturday.

Her vote tally was 263 higher than that of her rival candidate, Minister of Defence Antti Kaikkonen (Centre).

Kulmuni on Saturday set lofty objectives for her two-year stint at the helm of the traditional party.

“The Centre must be the largest party in the 2023 parliamentary elections,” she added in a news conference later on Saturday.

Kulmuni also revealed that she will not immediately take over the portfolio of the minister of finance but will discuss “practical issues” – such as the party’s representation on the Ministerial Committee on Foreign and Security Policy – with the portfolio’s current holder, Mika Lintilä (Centre), on Sunday.

“Boosting popular support is the most important duty of the chairperson,” she outlined. “A ministerial re-shuffle is not topical.”

Kaikkonen on Saturday encouraged the Centre to re-unite behind its new chairperson.

“Democracy has spoken. No more buts,” he stated in his speech. “The Centre moving forward is what’s important. I hope and believe this will be the starting gun for the new emergence of the Centre.”