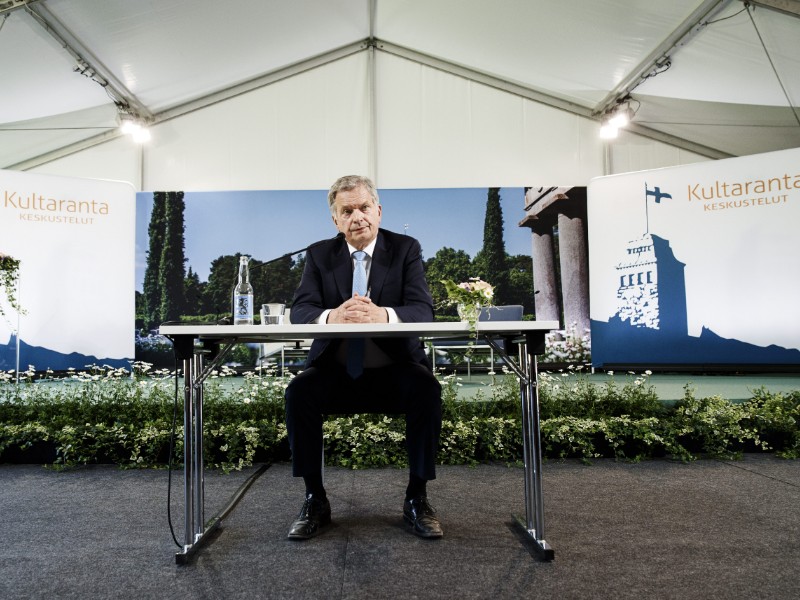 President Sauli Niinistö holding a press conference before the opening of the seventh edition of the Kultaranta Talks, a foreign and security policy event he hosts annually in Naantali, south-west Finland. (Roni Rekomaa – Lehtikuva)

PRESIDENT Sauli Niinistö has expressed his puzzlement with the debate stirred up by a section of the foreign and security policy resolution set forth in the government programme of Prime Minister Antti Rinne (SDP).

“Finland,” the section reads, “will not allow its territory to be used for hostilities against other nations”.

The clause has garnered plenty of attention in the foreign and security debate and has even been interpreted as an attempt to conform to the rhetoric employed by Russia. Ilta-Sanomat suggested in a recent editorial that the clause may have been added to the programme to appease the Nato-phobic Russia.

Niinistö rejected such interpretations yesterday in a press conference before the opening of the Kultaranta Talks, a foreign and security policy debate event he hosts annually in Naantali, south-west Finland.

“It’d be one odd country that told that you can feel free to use its territory for hostile purposes. As far as I understand, the clause matches word for word a report issued by the previous Parliament. Given that the Parliament was unanimous on the clause, I’m a bit puzzled about what the debate is about,” he said.

He estimated that major powers sitting tight is currently important for the effort to uphold world peace. “The European Union’s voice should be better heard in upholding peace. The EU, if anything, is a representative of peace in this regard,” he added.

The unity of the 28-country bloc, however, is being undermined by disagreements over immigration and monetary policy, as well as the looming withdrawal of the United Kingdom, according to Niinistö.

The Kultaranta Talks, held this year for the seventh time, will bring roughly a hundred experts and opinion leaders from different sectors of the society to Kultaranta, the official summer residence of Niinistö, on 16 and 17 June.