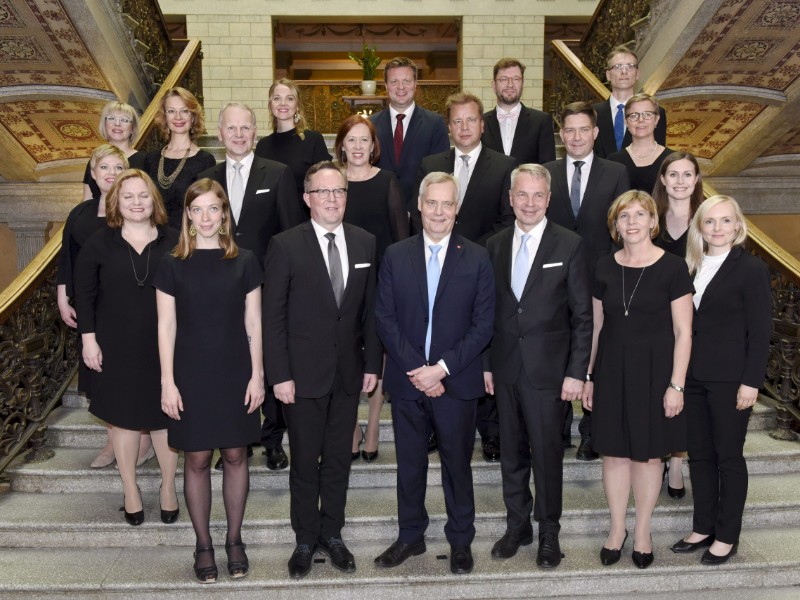 Prime Minister Antti Rinne (front row, third from left) posed for a photo together with the rest of his newly appointed government in the Government Palace in Helsinki on Thursday, 6 June 2019. (Heikki Saukkomaa – Lehtikuva)

KRISTA MIKKONEN (Greens), the newly appointed Minister of Climate and the Environment, has opened old wounds between the Centre and Greens.

Mikkonen on Thursday said to MTV that she considers it unlikely that all of the pulp mill projects on the drawing board can be carried out as climate and environmental objectives will curtail the use of forest resources.

“I find it difficult to see how all of the pulp mill projects that are on the drawing board – and there are many – could be carried out. The obstacle they’ll hit is that we simply don’t have enough wood given that we’ll also have to look after biodiversity and our climate goals,” she commented on Huomenta Suomi.

The Centre and Green League have found themselves repeatedly at odds over the issue of logging volumes, so much so that logging is not mentioned once in the government programme of Prime Minister Antti Rinne (SDP). The programme, however, does state that the five-party coalition is committed to both reducing emissions and strengthening carbon sinks in order to meet the ambitious objective of achieving carbon neutrality by 2035.

“It’s quite a difficult equation if we think that wood use will be increased significantly,” said Mikkonen.

Ilta-Sanomat reported last week that the wrangle over logging volumes in the coalition formation talks ended in an emphatic loss for left-green parties, with the coalition effectively deciding to show a green light to all pulp and bioproduct mill projects.

Katri Kulmuni (Centre), the newly appointed Minister of Economic Affairs, stressed to Uusi Suomi on Thursday that the government will not become an obstacle to the bioproduct mill planned in Kemi, Finnish Lapland, by Metsä Group.

“It’d be incredible if that happened,” she retorted.

“Exports are our livelihood and it’s always better if we can create domestic investments. We have to keep in mind that companies make their decisions on where to invest in independently,” added Kulmuni. “This new government will definitely not become an obstacle to [the bioproduct mill in Kemi].”

Finnish industries, she argued, should first and foremost be perceived as part of the answer to climate change. “If Finland succeeds in becoming the first country to get rid of fossil fuel use in industries, it’ll be a massive leap forward,” she said.

The National Coalition began its tenure in the opposition by calling attention to the divide between the Centre and Greens. Aura Salla, the chairperson of the National Coalition in the European People’s Party, said it will be interesting to see whether the government can meet its employment rate target while one of its members is “torpedoing” new pulp mill projects.

“The Kemi pulp mill is a reasonable investment in growth in the high technology country that’s Finland,” she said on Twitter.