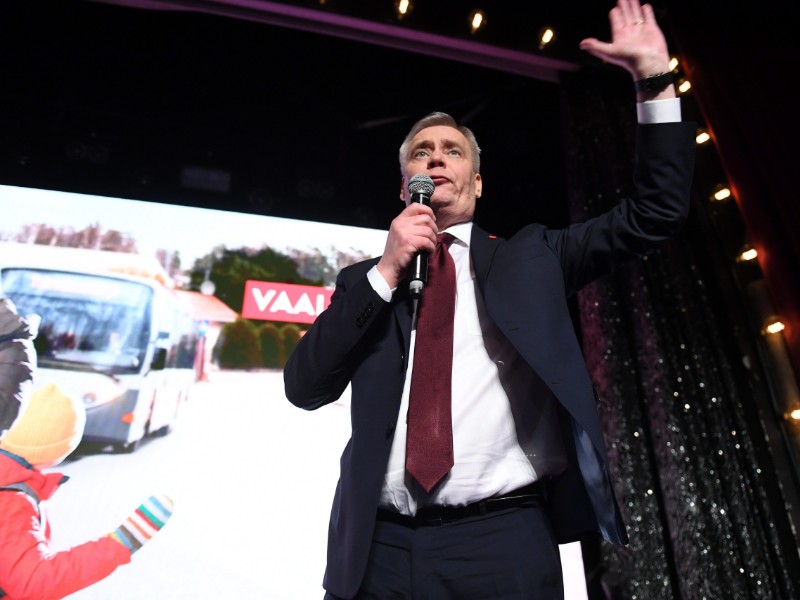 THE SOCIAL DEMOCRATIC PARTY scraped a victory in the parliamentary elections held in Finland on Sunday, 14 April.

After leading all major polls by a clear margin for months, the left-wing party narrowly avoided a last-minute collapse by clinching 17.7 per cent of the vote – its second smallest vote share ever in parliamentary elections – and winning 40 seats in the Finnish Parliament for 2019–2023.

“The Social Democrats winning the elections is a big win for Finnish democracy,” Antti Rinne, the chairperson of the Social Democratic Party, was quoted as saying in his victory speech late on Sunday by Helsingin Sanomat.

Rinne also admitted that he was expecting a better result for the party. “But this is the will of the people, and we have to respect it,” he added.

The Finns Party ultimately fell only 0.2 percentage points short of upsetting the pre-election favourite, after a late-blooming campaign helped the populist right-wing party win 17.5 per cent of the vote and 39 seats in the Parliament. The National Coalition, in turn, came to within 0.5 percentage points of the Finns Party, becoming the third largest party with 38 seats in the Parliament.

The biggest loser of the elections was the Centre Party, which received a vote share of 13.8 per cent – 7.3 percentage points smaller than in 2015 – and lost 18 seats in the Parliament.

The Green League scaled up its vote share by three percentage points to 11.5 per cent, winning a total of 20 seats in the Parliament. The Left Alliance, similarly, improved noticeably from the previous elections, winning 16 seats with a vote share of 8.2 per cent.

The Swedish People’s Party and Christian Democrats both maintained their current number of seats in the Parliament.

The ensuing coalition formation process is set to be very difficult, not only because of the balanced distribution of votes but also because of the massive reforms on the agenda of the next government: the social and health care reform, and the social security reform.

Rinne on Sunday announced he will send all other parties a list of questions, including ones about values, to decide which parties to invite to the coalition formation talks. “After we’ve seen the answers, we can see who we should likely try to form a government with,” he said according to Helsingin Sanomat.

One of the more likely outcomes appears to be a six-seat majority government formed by the Social Democrats, National Coalition, Green League and Swedish People’s Party.

The Social Democrats could also find itself in the opposition for the second consecutive term if it failed to form a partnership with either the National Coalition or Centre Party. The outcome in that scenario could be a right-wing government formed by the Finns Party, National Coalition and Centre Party, which would have 108 of the 200 seats in the Parliament.

Rinne and Petteri Orpo, the chairperson of the National Coalition, both told YLE last week that they would turn down the opportunity to enter into a ruling coalition with the Finns Party.

The Blue Reform, the splinter group formed by the moderate wing of the Finns Party in November 2017, collapsed into political oblivion after failing to win a seat in the Parliament. Its candidates included Minister of Defence Jussi Niinistö, Minister of Employment Jari Lindström, Minister of Social Affairs and Health Pirkko Mattila, and Minister of European Affairs, Culture and Sports Sampo Terho.

Other notables who failed to win re-election include Simon Elo, the chairperson of the Blue Parliamentary Group, Touko Aalto, an ex-chairperson of the Green League, and Kimmo Tiilikainen (Centre), the Minister of the Environment.

The electoral districts will announce the results of the election recount on Wednesday, 17 April.