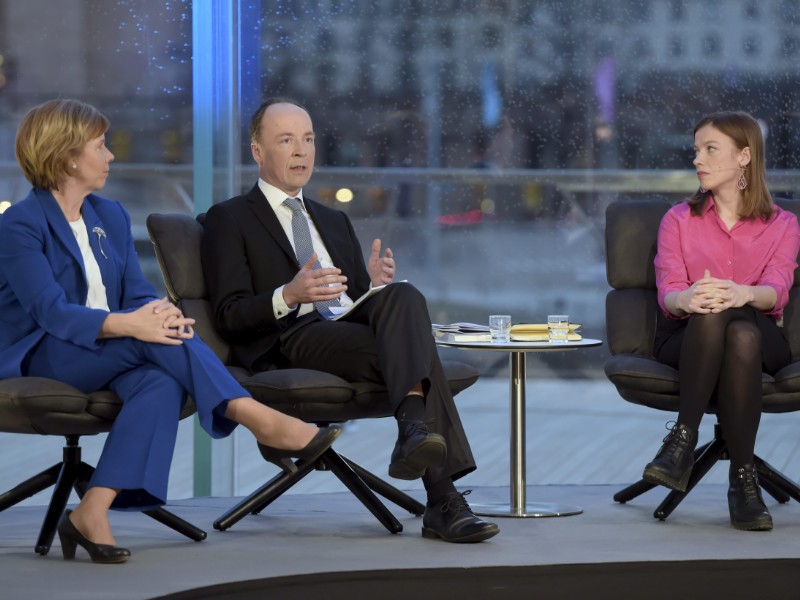 Li Andersson of the Left Alliance (right) and Anna-Maja Henriksson of the Swedish People’s Party (left) have voiced their reservations about forming a coalition with Jussi Halla-aho’s (centre) Finns Party. (Antti Aimo-Koivisto – Lehtikuva)

A NUMBER of Finnish party leaders have reiterated their reservations about forming a coalition government with the Finns Party.

YLE on Thursday asked the chairpersons of eight other parties to raise their hand if they would refuse to enter into a ruling coalition with the Finns Party. The chairpersons who raised their hands were Antti Rinne (SDP), Petteri Orpo (NCP), Pekka Haavisto (Greens), Li Andersson (Left Alliance) and Anna-Maja Henriksson (SFP).

Rinne immediately clarified that if he found himself leading the coalition formation process, he would send the same questions to all parties and determine based on their answers which parties are capable of co-operating with the Social Democrats.

Andersson, in turn, called attention to the role of the populist party in the government of Prime Minister Juha Sipilä (Centre).

“The Finns Party has participated in the policy making that has increased inequalities, as a result of which almost 40,000 people have fallen below the poverty line. When you combine with an immigration policy stance that aims to stop all forms of humanitarian immigration to Finland […], I think it’s very unlikely we’re able to find common ground,” she stated.

Jussi Halla-aho, the chairperson of the Finns Party, estimated that other parties are sending mixed messages about the possibility of forming a ruling coalition with the Finns Party.

“On the one hand, we should show responsibility and seek a place in the government, but, on the other, other parties are rejecting the possibility of coalition co-operation with the Finns Party,” he lamented.

YLE also reported yesterday that popular support for the right-wing opposition party has risen by 1.2 percentage points to 16.3 per cent, making it the second most popular party in the country ahead of the National Coalition.