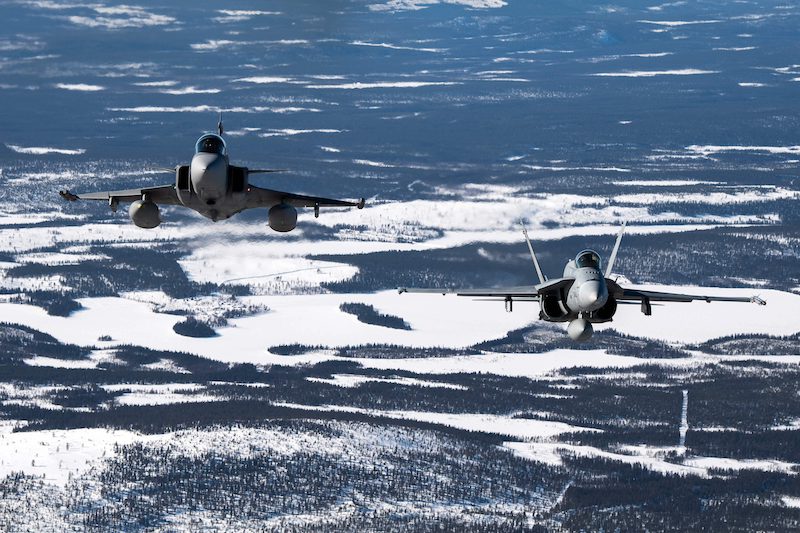 A Swedish Gripen jet (L) and a Finnish F-18 Hornet take part in joint exercises between the two air forces over the Arctic Circle towns of Jokkmokk in Sweden and Rovaniemi in Finland on March 25, 2019. - The Airforce Exercise 2019 took place from March 22 to 27, and missions were flown on a 24 / 7 basis. LEHTIKUVA / AFP

Mikheil Saakashvili’s country was a victim of Putin’s aggression. Finland and Sweden won’t be.

In a recent Foreign Policyarticle, former Georgian President Mikheil Saakashvili argued that “Russia’s most likely target in the near future is either Finland or Sweden.” As Saakashvili explains, “by attacking a non-NATO country, [Russian President Vladimir] Putin does not risk a proportional response in accordance with Article 5. But by targeting a European country, he can expect to reap the rewards of public approval at home from voters who are desperate for a victory.”

Fortunately for Finland and Sweden, Saakashvili’s argument is based more on threat inflation, Russia hype, and bad analysis than it is on a realistic understanding of interstate relations in Northern Europe today.

Saakashvili’s argument is based more on threat inflation, Russia hype, and bad analysis than it is on a realistic understanding of interstate relations in Northern Europe today.

First, starting a war is always a potential avenue for future catastrophe. Looking at the costs of Russia’s incursions in the Crimean peninsula and Eastern Ukraine since 2014, they are very high—and rising. Today, Russia faces increasing economic sanctions and political isolation. If anything, Russia’s self-described success in Ukraine was a Pyrrhic victory.

Second, even though relations between Russia and the West are strained, there is quite a lot of day-to-day cooperation. This state of affairs reflects the fact that Western states—or Europe as a whole—cannot be secure without some sort of a long-term diplomatic understanding with Russia. Both sides recognize this. Recently diplomacy has been underrated, but that does not mean that one should stop trying. Finland has been one of the few European countries engaging Russia at the highest political level in order to lower tensions. Waiting for Russia to capitulate in front of more and more economic sanctions or to expect it to disintegrate peacefully through a process of internal turmoil would be a mistake. Both Russia and the West have an interest in solving the ongoing crisis without recourse to the force of arms.

And in the case of Finland, territorial defense against external aggression has been the raison d’être of the Finnish Defense Forces ever since the country gained independence more than 100 years ago.

There was one exception: Finland. It never dropped the ball on territorial defense. Today, this is paying dividends. In the field of defense, there are no quick fixes. Lost military capability cannot be replaced quickly. This is at the heart of the European military malaise. There is no need for so-called external tripwire forces when you have your house in order. Trying to outsource one’s defense-related costs to others (for example to the United States) is no way to proceed when dealing with questions of national security and survival. Too many European states have become too reliant on the United States to deter external military—and if needed, to defend their national territory and the territory of the NATO alliance. aggression

Sweden did have its peace dividend moment after the collapse of the Soviet Union and the end of the Cold War. It lost a significant amount of military capacity for territorial defense, particularly in the land domain. But still, Sweden maintained significant maritime and air warfare capabilities throughout the period. And after 2014, Sweden has refocused on the defense of its own territory and adjacent areas. In addition, military procurement has been boosted. And the outlook for future increases of the Swedish defense budget looks positive. In addition, Finland and Sweden are engaged in bilateral and multilateral defense cooperation arrangements. Maintaining and developing credible territorial defense capabilities does not restrict possibilities for international cooperation.

In fact, Finland and Sweden have expanded their respective defense cooperation agendas—with each other bilaterally—and with others. The United States is an important actor in this regard, as is NATO. But defense cooperation cannot substitute for sufficient national military capabilities. This is the logic behind Article 3 of the North Atlantic Treaty. It applies to Finland and Sweden as it does to any other country—whether a member state of NATO or not.

After all, even the biggest bear will not eat a porcupine. Georgia did lose part of its territory to Russia in 2008, when Saakashvili was president of Georgia. There is much to learn from that experience, but it does not suggest that Russia will start a war against Sweden or Finland, as Saakashvili contends, in order to boost Putin’s popularity.

The Author is a professor of war studies at the Finnish National Defense University. The views expressed here are his own.

This article was originally published in The Foreign Policy Magazine and is republished here with permission.