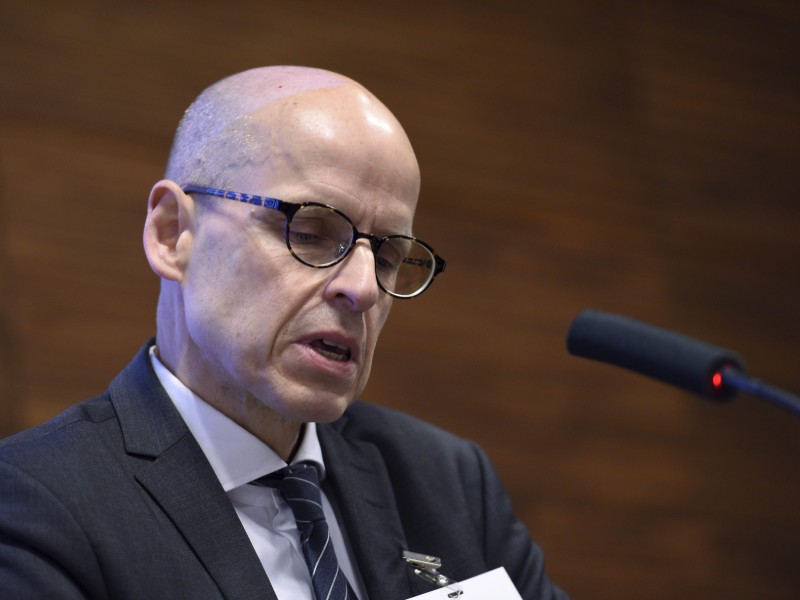 Martti Hetemäki, the permanent state secretary at the Ministry of Finance, presented the remarks of ministry officials about the principles of economic policy for the next electoral term in Helsinki on Monday, 4 February. (Credit: Martti Kainulainen – Lehtikuva)

OFFICIALS at the Ministry of Finance urge Finland to press on with measures to consolidate central government finances.

The Ministry of Finance on Monday estimated that additional fiscal adjustment measures worth roughly two billion euros are necessary to create a surplus of 0.5 per cent and, thereby, build fiscal buffers for the next recession and mitigate the pressure on public spending arising from population ageing.

The adjustment measures, it said, should be introduced gradually at an annual pace of 500 million euros with an emphasis on reducing public spending and curbing rising costs.

“A fiscal adjustment of two billion euros is needed in order to strengthen buffers and sustainability. The buffers will be needed especially when the economic outlook becomes bleaker,” Sami Yläoutinen, the economic policy co-ordinator at the Ministry of Finance, told Kauppalehti.

“The state of the public economy is still weak and it will weaken further unless we take immediate action.”

Yläoutinen also reminded that the estimate of the necessary adjustment measures is based on the assumption that the long-discussed social, health care and regional government reform is carried out. “There’s a wide consensus on the need to carry out the reform to keep costs in check,” he said to the commerce-oriented newspaper.

If the reform is delayed any further, it will also increase the need to adjust public revenues and expenditures, reminded Yläoutinen.

The Ministry of Finance identified tax hikes as one of the possible measures to strengthen public finances, but reminded that they would have to be “very limited” to prevent any adverse effects on economic growth and employment. Policy makers, it added, should also take into account international tax competition and the effect of taxation on work and business incentives when weighing up the possibility of raising taxes.

Spending cuts, meanwhile, should be targeted in a way that does not undermine the preconditions for economic growth.

“Cuts should be avoided in for example education, innovation and research and development spending, meaning costs that are contributing factors to the chain improving productivity,” said Yläoutinen.