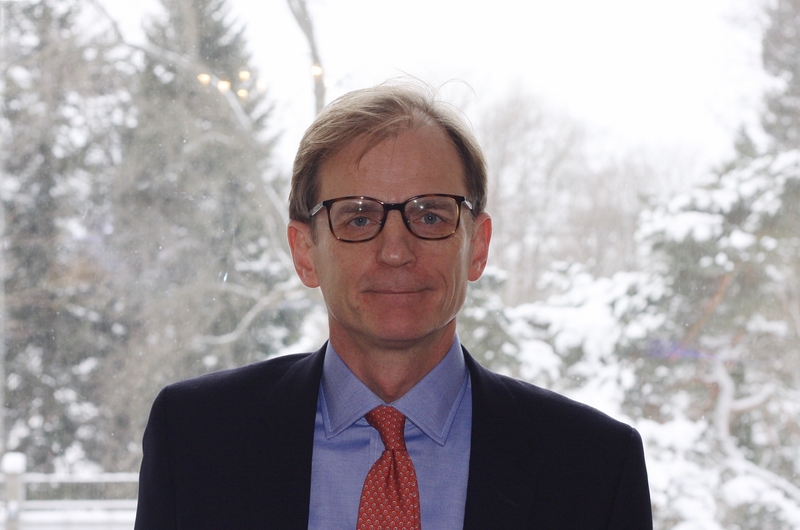 Tom Dodd at the Ambassador's Residence in the UK embassy (Image: Helsinki Times)

WITH BREXIT JUST AROUND THE CORNER and fears of a “no deal” cliff-edge mounting, UK and EU governments have been scrambling to put in place emergency measures that would protect citizens on both sides of the Channel.

Last week the Finnish parliament announced it will be pushing through emergency legislation designed to protect the rights of UK nationals in the event of no deal. The legislation guarantees the residency, work, and study rights of all British nationals currently in Finland up until at least December 2020.

We spoke to the UK’s ambassador to Finland, Tom Dodd, at the British Embassy to find out more about the state of bilateral negotiations between the two countries and what else Brits should be doing to prepare for Brexit.

First of all, how have you found your first year working as the British ambassador to Finland?

It’s been great. This is obviously a very interesting time to be in Finland, during the run-up to Brexit, but that’s not even what keeps me busy most of the time. I mostly work on strengthening bilateral relations between the UK and Finland – an obviously expanding field.

Speaking of bilateral relations, Brits in Finland received a little bit of good news last week with the announcement that their residency rights will be secure in the event of a no-deal. Did the British government play any role in influencing this legislation?

Well, we’ve been discussing no-deal preparations with the Finnish government for quite some time. Since at least last summer we’ve been working hard to ensure the best possible outcome for British nationals in Finland in any scenario, in terms of both citizen’s rights and of course, trade.

How has the trade relationship between the UK and Finland fared over the past few months?

Business is continuing all the time between the UK and Finland. The overall trade volume between the two countries has actually grown in the past two years. Obviously, Brexit has generated a lot of uncertainty, and there have been some deals which haven’t gone ahead or have been paused as a result. I’ve heard of some issues, but it’s a very mixed bag. Just the other day I was at a meeting with a Finnish IT company that is opening offices in London. Brexit is not the only factor on a business’s mind when it comes to doing business with and investing in the UK.

Are there any outstanding issues that aren’t yet covered by Finland’s no-deal legislation?

I haven’t yet seen the legislation as it hasn’t been published. However, I have been told that it will effectively cover all of the existing rights of British nationals in Finland until December 2020. This includes the right to live here, claim benefits, access to healthcare etc.

So are the terms of this legislation basically identical to those outlined in Theresa May’s Withdrawal Agreement?

On the face of it I’d say yes, they do look very similar. There are some outstanding issues we need to discuss with the Finnish government e.g. seasonal workers in Lapland, but mostly the nature of this legislation is very similar to the terms laid out in the Withdrawal Agreement transition period.

So what happens after December 2020?

We haven’t negotiated that yet. We’ll have to wait and see what happens in the UK first, and there are of course the Finnish general elections coming up which may affect things as the current government cannot do anything to bind the hands of the next one.

We’re aiming for reciprocity in the long-term and we aim to put in place a new immigration system that will facilitate the movement of people between the UK and the EU in a way that is appropriate. I can’t comment on the position of the Finnish government, but we hope for a reciprocal arrangement. We’ll just have to see how the elections go and once there’s a new government in place we’ll work closely with them.

Finland will also be hosting the EU presidency in the second half of this year – the first post-Brexit EU presidency. So we’re obviously looking forward to working very closely with Finland as a partner in the coming year.

The outcome of Brexit remains far from certain. Is the UK embassy here working on the assumption that Theresa May’s deal will pass, or no-deal, or no Brexit?

The policy of my prime minister is that the deal on the table is the best deal available. She is working hard to gain the approval of the House of Commons or to find a compromise that is satisfying to both the Commons and the EU. Government policy is not to have a second referendum and to not delay Brexit. Brexit is happening in March this year.

Any sensible government has to prepare for the possibility of no-deal. That’s not our preferred approach but it may happen. The Foreign Office is preparing for no-deal and we’ve hired extra staff to help with that and to provide any additional assistance for British nationals and companies doing business in the UK.

What should British nationals be doing at this time to prepare for Brexit?

The UK government website also provides comprehensive information for British nationals in Europe and what they should be doing to prepare for a no-deal. There is a specific webpage for Brits in Finland that contains all of the information on what you should be doing.

Right now, there are certain steps British nationals should be taking; for example, converting driving licenses and making sure your passport is valid.

And what is your preferred Brexit outcome?

And that’s how you personally feel?

That’s how I feel yes. As a civil servant that’s the deal you make. That’s my job. I have a responsibility to the British community here but I’m also a representative of Her Majesty’s Government. These are roles I must balance as best I can.

And what are your personal opinions on a second referendum?

The policy of the government is not to have a second referendum. We already had a referendum and it would be unwise to have another one. That is government policy. There are a number of issues we need to address across Europe that go beyond Brexit. Life will go on after Brexit.

And what do you hope for the UK and Finland’s post-Brexit relationship?

I believe it will fundamentally be the same. We already enjoy a very close relationship and the British and Finnish people have a similar outlook and fundamentally agree on the same things, generally speaking. That will continue in the future and I don’t think that will change.

Obviously, our relationship with the EU is a work in progress. There’s no way we will not continue to enjoy a profoundly close relationship in terms of security and commerce and everything else because that is what’s in everyone’s best interests.