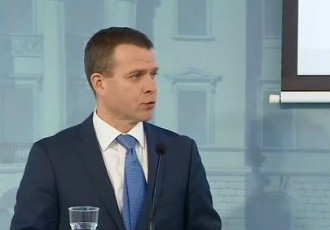 The Finnish Government unveiled on Tuesday an extensive action plan to halt the uncontrolled flow of asylum seekers into the country, bring the subsequent costs under control and support the integration of successful asylum applicants.

The action plan comprises a total of 80 action steps, revealed Petteri Orpo (NCP), the Minister of the Interior.

The Government is set to, for example, offer employment to asylum seekers either in the reception centres or their immediate vicinity. Asylum seekers should according to it work in exchange for the integration services they receive.

The Government believes people should not have to wait idly for a decision on their asylum applications, explained Jari Lindström (PS), the Minister of Justice and Employment. “It's better for civil peace,” he pointed out.

Orpo and Lindström shed light on the contents of the action plan along with Prime Minister Juha Sipilä (Centre) at a news conference on Tuesday.

A positive asylum decision will no longer be permanent, but immigration authorities will re-evaluate the security situation in the country of origin twice a year and, if the situation is deemed to have improved, remand the residence permit for re-consideration. “This cements the fact that residence permits are temporary,” said Orpo.

The Government will also re-evaluate the security situation in Afghanistan, presumably to make it more difficult for applicants from the country to win asylum.

Orpo estimated that two-thirds of the roughly 35,000 asylum seekers who are expected to arrive in Finland in 2015 will be denied asylum.

The Government will continue to explore the possibility of not extending residence-based social security services to people who have won asylum in Finland.

The Finnish Immigration Service (Migri) confirmed on Tuesday that it will shut down its reception centres in Merikarvia, Parikkala and Vantaa by the end of January as well as suspend the preparations to set up reception centres in Kittilä, Pello and Ylitornio. A decision on the closures was taken based on a joint assessment conducted by Migri and the National Police Board.

Plans are also afoot to establish two reception centres for people returning to their country of origin – so-called immigration removal centres – in the capital region. The centres will be used to accommodate people who have been denied asylum in Finland.