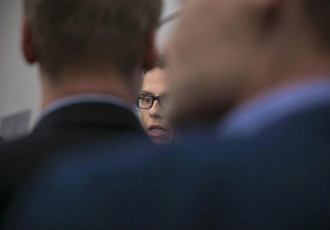 Alexander Stubb (NCP), the Minister of Finance, issued yet another apology for his mistake with percentages before delivering a lecture at the University of Tampere on Monday.

His apology was the centre of attention at the hastily-organised press conference. “I'd like to again offer my sincerest apology for the mistake I made at the Parliament last week by accidentally using a percentage that doesn't exist. I, and I alone, am responsible for that mistake,” Stubb emphasised to members of the media.

He admitted that he made the inaccurate estimate off the top of his head.

“I by no means wanted to mislead anyone about the issue,” he underlined.

Stubb was catapulted into the eye of a media storm on Saturday after he admitted to providing inaccurate information to the Parliament regarding the share of public officials in favour of a proposal to overhaul the securities custody system. He stated in defence of the proposal that “roughly 90 per cent of the comments [from public officials] are, in fact, positive”.

An inquiry by Helsingin Sanomat found, however, that no more than ten per cent of the public officials who have commented on the proposal actually support it. The inquiry thus indicates that the percentage cited by Stubb must be inaccurate.

What is crucial according to him is that the decision is unanimous.

The Minister of Finance also said he is ready, if necessary, to offer another account for his inaccurate statement to the Parliament. The opposition parties have every right to demand an explanation for the incident, according to him.

“The percentage I used to refer to official comments or other statements was outright inaccurate, and I sincerely apologise for that,” Stubb reiterated.