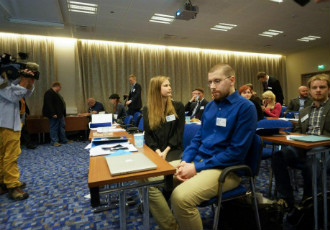 Sebastian Tynkkynen has received widespread support to continue as the chairperson of the Finns Party Youth after being stripped of his membership in the parent party, having beaten his rival candidate, Samuli Voutila, 42–22 in the chairmanship election in Seinäjoki on Sunday.

Tynkkynen has interpreted the election result as a sign that the Finns Party should re-consider its decision to expel him from the party.

“I've received a lot of support from the field to continue in the party. I believe and hope that the illegal decision to expel me can be revoked,” Tynkkynen told Helsingin Sanomat after beating his rival candidate on Sunday.

Voutila, a business-owner from Kuopio, said he decided to challenge Tynkkynen in an attempt to make sure the youth organisation maintains a good rapport with its parent party. “Samuli is a good guy. We have no differences in policy choices,” said Tynkkynen.

Tynkkynen revealed that he plans to discuss his expulsion with the party leadership in the days to come.

Despite being stripped of his party membership, Tynkkynen is allowed to attend the meetings of the party government of the Finns Party as the third chairperson of the party. He reportedly was not notified of his expulsion until a couple of days after the fact.

Tynkkynen was expelled shortly after he demanded that the leadership of the Finns Party convene for an extraordinary meeting to vote on whether or not the party should continue in the Government and accused the party of shying away from its platform on the issues of bailout loans and immigration.

He has also come under criticism from the chairperson of the party, Timo Soini, for attending a meeting of the Sweden Democrats.