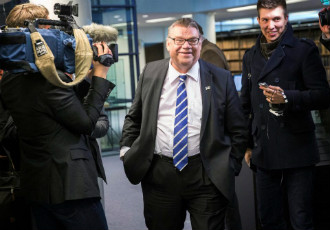 Chairperson Timo Soini believes the recent plunge in the approval rating of the Finns Party stems from the competitiveness measures and coercive legislative changes outlined by the Government.

The approval rating of the Finns Party has thus eroded by seven percentage points since the parliamentary elections in April.

“The hook thrown from the left has hit us hard,” Soini analysed at the Parliament on Thursday. “We've been warned by male workers.”

The Government has drawn up a proposal to reduce the costs of businesses by, for example, slashing holiday bonuses and sick leave allowances. The measures have been branded as coercive revisions because they contravene the stipulations of collective agreements.

The fall in support for the Finns Party is exceptional. Jari Pajunen, a research director at Taloustutkimus, told YLE that comparable movements in the approval ratings of parties have not been recorded in such a short time period for several decades.

Support for the other two ruling parties has similarly declined. The poll found that the Social Democratic Party has overtaken the National Coalition Party as the second largest and the Green League the Finns Party as the fourth largest party in Finland.

The erosion of the support rating of the Finns Party can also be attributed to the third bailout loan granted to Greece and the sharp increase in the number of asylum seekers arriving in Finland.

Soini, however, voiced his doubts on Thursday that the influx of asylum seekers could have had a significant effect on the popularity of the Finns Party, pointing out that the issue would not prompt its supporters to stand behind the Social Democrats.

He also reiterated that there is no reason for the party to convene to decide whether or not to continue in the Government due to the immigration policy, as has been demanded by the third chairperson of the party, Sebastian Tynkkynen. Party secretary Riikka Slunga-Poutsalo is similarly of the opinion that no extraordinary meeting is required.

Chairperson Antti Rinne expressed his delight with the resurgence of the Social Democratic Party on Thursday. “We've listened to the public,” he told.

He also admitted to being concerned about the polarisation of the public and urged all stakeholders to look for joint solutions. “We must muster up the political leadership to allow citizens to feel safe in the country. The same goes naturally also for asylum seekers,” he said.

Ville Niinistö, the chairperson of the Green League, estimated that support for the Finns Party has fallen especially because they have failed to back up their words with actions. “The Finns Party promised before the elections to do a number of things and to toughen the immigration policy in a way that infringes on obligations arising from basic human rights. The conflict between their words and actions is clear now that they've failed to back up [their promises],” he said.

The margin of error in the poll by YLE is +/-1.5 percentage points for the largest parties.