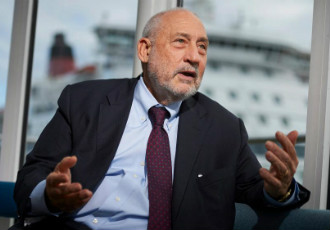 Joseph Stiglitz, a 73-year-old economist who is known as an outspoken critic of the economic policy pursued in the eurozone, has turned his attention to the Government of Finland.

“Internal devaluations have practically never worked,” Stiglitz says, referring to the plans of the Government to slash wages in order to promote exports. “One indication of this is that almost every country has abandoned pegged currency rates.”

A decline in earned income, the Nobel Laureate explains, will gnaw away at domestic demand and create pressure for a fall in consumer prices, or deflation, thus compromising the ability of households and businesses to meet their debt obligations.

“You're gambling that the export sectors will recover faster than the domestic sectors will crumble. In the entire eurozone, only Spain's exports have reacted significantly to wage cuts. It's probable that the outcome is an even weaker economy.”

Stiglitz was in Finland on Saturday to take part in a conference organised by the United Nations University World Institute for Development Economics Research. He says he completely understands the tens of thousands of Finns who gathered in downtown Helsinki on Friday to express their disapproval with the cuts outlined by the Government.

“There's no mechanism through which a cut in the wages of nurses could directly promote exports. The only justification is that it finances the tax breaks of businesses. The protesters have every reason to suspect that it's simply a gift from the Government to businesses.”

He points out that many of our problems are a consequence of the limitations ingrained in the euro, such as austerity regulations and the loss of our own currency.

What if the euro cannot be nudged into a more positive direction? “You should consider leaving the euro in that case. I recognise it sounds radical, but small economies such as you are currently paying too high a price for it,” replies Stiglitz.

“The euro is ultimately only a piece of paper. If the euro can't be reformed, it may be necessary to bury the entire single shared currency to rescue the European project.”

Stiglitz believes Finland should seek to jolt its economy with borrowed stimulus. “It'd absolutely make sense. I'm not talking about taking a holiday but about investing in people and infrastructure and building new industrial sectors.”

He also dismisses claims that the cuts are necessary in order not to leave a massive debt burden for the next generations.

“That's so wrong. You're robbing from your children by not making rational investments with free money. Destroying the future prospects of young people will have political and social consequences. The administration of your country is eroding the future of Finland,” Stiglitz says.

Finns often argue that economists from across the pond, such as Stiglitz, do not understand the special circumstances of Finland. The United States, for example, is able to conjure millions of new workers by relaxing the entry regulations on its border with Mexico. In Finland, where the labour force is shrinking and growth potential is weakening, it is claimed that as the outlook for future growth is becoming bleaker stimulus measures would require even fiercer austerity measures in the future.

“That would have a grain of truth in it if you weren't struggling with unemployment,” replies Stiglitz. “Yes, your growth will be weaker in the future, but cuts will weaken it even further.”

Fiscal stimulus, he adds, is a genuine means to increase the labour supply as it enables people to get a foot in the door of the working world. “It's ever more important to boost potential growth under the conditions of a contracting labour force.”

Stiglitz also advises against using a stick to guide people to employment under the prevalent conditions. “Your problem at this moment is a decline in demand. These measures will bring about pressure to lower wages, eat away at demand and exacerbate the unemployment problem,” he says.

An increase in the number of job-seekers, he argues, will not spur job creation in Finland under the current circumstances.

“The very thought of it is absurd. We in the United States had 50 job-seekers per every job at the depth of the recession. I've never seen a rational analysis of why an increase in the number of job-seekers would've been good for the economy,” he states.