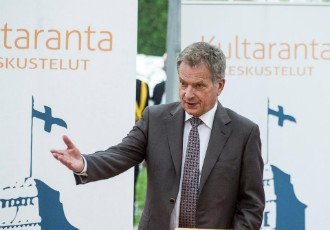 President Sauli Niinistö opened the third Kultaranta Talks at his official summer residence on Sunday, estimating in his opening address that online surveillance is here to stay.

“Intelligence is a central, omnipresent sector of international politics. Yet again, it is not enough to see things the way you want to see them,” he said, explaining why a task force has been assigned specifically to mull over intelligence gathering operations.

Online surveillance capabilities are a prerequisite to safeguarding national security, the President summarised.

Niinistö in his address reminded that the economic woes of Finland have continued since the onset of the financial crisis in 2008. He paraphrased the title of a book published by President Urho Kekkonen, Does Our Country Have the Patience to Become Prosperous?, by asking: “Does our country have the courage to reform?”

“That is the question today,” he said.

“Economic development and social cohesion are also the foundation of our external position,” Niinistö argued. The stronger a nation is internally, the stronger it is externally, he added, shedding light on his decision to set up an economic task force as part of the Kultaranta Talks.

The President gauged that the more foreign policy is discussed the better. He began his address by referring to one of his other predecessors, President Juho Kusti Paasikivi, and the oft-cited remark about the acknowledgement of facts and the root of all wisdom.

In addition, Niinistö estimated that the international system is undergoing dramatic changes that warrant the reconsideration of previous assumptions all around the world – perhaps especially in Europe. “Europe is not surrounded by an arch of stability but by an arch of conflicts and uncertainty,” he said, adding that the demand for our values is abating.

“What are us Europeans prepared to do for security?” he asked, hoping for constructive answers on Monday.

Niinistö is on Tuesday scheduled to sit down with his Russian counterpart Vladimir Putin. “I regard direct dialogue as natural and necessary particularly today, the situation being what it is,” he stated.

Roughly one hundred experts in foreign and security policy – including decision-makers, researchers, journalists and industry representatives – have been summoned to Kultaranta, Naantali, to discuss Russia, the Ukraine crisis, the threat of terrorism, intelligence and democratisation in Europe and across the world.

For the first time, also foreign experts have been invited to contribute to the debates. The participants include Strobe Talbott, a former US Deputy Secretary of State and the president of the Brookings Institution, Alexei Kudrin, a former Russian Minister of Finance, and Wolfgang Ischinger, the chairman of the Munich Security Conference.

The Kultaranta Talks are to formally begin on Monday. They are not expected to yield any concrete decisions due to their nature as a discussion event.

“The Kultaranta Talks will be organised if there is something to discuss,” Niinistö stated. “There has been and will be again.”