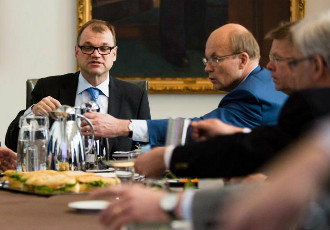 Prime Minister-designate Juha Sipilä (Centre) has urged labour market organisations to present their proposal for a social contract by Thursday afternoon in order to be able to review it before announcing which parties he will summon for coalition negotiations with the Centre Party.

But what is this much-debated social contract? No one knows exactly as it would be the first of its kind. Helsingin Sanomat compiled the answers to a few frequently asked questions about the contract.

What is it exactly?

The social contract is a measure proposed by the Prime Minister-designate to encourage labour market interest groups to commit to decisions that promote employment, productivity and competitiveness in Finland. It could therefore alleviate the plight of the public and curb debt accrual by reducing the need for spending cuts.

Sipilä wants to canvass the willingness of labour market organisations to commit to the contract sooner rather than later because decisions affecting the labour markets will inevitably dictate economic policy and government programme formulation.

The more effective the social contract, the fewer spending cuts will be necessary, believes the Centre Party.

Who will determine its contents?

The term “social contract” is problematic, however, as labour market organisations interpret it as a legal agreement.

How likely is it that an agreement is found?

Seasoned labour market bosses have downplayed the likelihood of agreeing on such a comprehensive contract in such a short period of time. On the other hand, pressure for a declaration of intention of some sort is building.

Many of the issues on the table have already been discussed for years, to no avail.

Is there willingness to find an agreement?

All stakeholders acknowledge the gravity of the economic woes of Finland and agree that measures to improve productivity and competitiveness in the country are direly needed. The differences of opinion over the necessary measures, however, remain as pronounced as ever.

Although the stakeholders want to contribute to alleviating the woes of Finland, time may prove a insurmountable obstacle.

Why are the negotiations so difficult?

The negotiations have proven difficult not only due to severe time constraints but also due to the unwillingness of employees to waive benefits, such as holidays, protection against dismissal and working hours without any concessions.

Employers, in turn, are prepared neither to waive their rights or to subscribe to cost increases, while the Government is not in a position to offer concessions in exchange for the revisions.

The Government is currently expected to cut taxes in June to facilitate negotiations over wage moderation.

The most straightforward aspect of the negotiations are decisions that affect the position of only a limited number of stakeholders, such as removing regulations and developing the channels of communication to workplaces.

One of the key objectives of the negotiations, increasing working hours, is not something the heads of central organisations can decide on independently. Working hours are determined by employee and employer representatives through collective bargaining.

What preparations have been made thus far?

The stakeholders convened to discuss the contract with Sipilä early on Wednesday. The negotiations were based on dozens of different summaries about the prevalent conditions in Finland.

The outlines of the contract have been on the agenda of three working groups led by Centre Party MPs Anne Berner, Matti Vanhanen and Olli Rehn.

It remains premature to speculate on the effects of the possible contract on the terms and conditions of employment, but the objective is to encourage the determination of regulations and working hours at the local level and, thus, to enhance their flexibility.

Sipilä has announced that he will only approve of a balanced contract that affords additional protection for employees in exchange for, for example, shorter notice periods. Such additional protection could include labour market training – something that employers have been reluctant to fund.

No agreement on wages is sought in the negotiations because a decision on the continuation of the Pact for Employment and Growth, a centralised wage agreement hammered out in 2013, is due in June. The stakeholders will also discuss industrial peace as part of their negotiations over the continuation, with employers reportedly calling for higher fines for illegal strikes.

As the negotiations were suspended earlier this year, employers may be interested in discussing industrial peace as part of the ongoing negotiations with Sipilä and employee representatives.

Pensions are not on the agenda in the ongoing negotiations.