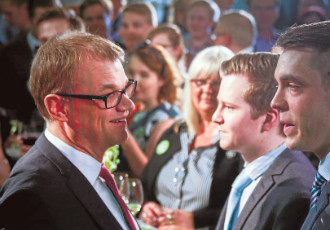 The Centre Party won the parliamentary elections on Sunday by a clear margin – although not quite as clear as expected. The opposition party swept the elections by gaining 14 seats in the Parliament to take its total to 49.

The other winner of the elections was the Green League. Other parties, in turn, seemed to take steps in the wrong direction.

The Social Democratic Party recorded the worst election result of its history as its seat share slipped from 42 in 2011 to 34. Left-wing parties – the Social Democrats and the Left Alliance – lost a total of 10 seats to hold 46 out of a total of 200 seats in the Finnish Parliament.

Voter turnout dropped moderately to 70 per cent from 70.5 per cent at the previous elections.

The triumph of the Centre Party can be attributed particularly to the failures of the Cabinets of Jyrki Katainen (NCP) and his successor Alexander Stubb (NCP). With discontent with the ruling parties boiling, the Centre had to do very little to win over voters in the opposition.

In addition, its chairperson Juha Sipilä succeeded in convincing a number of business-owners to switch their support from the National Coalition to the Centre in hopes of a change in policy-making.

The popularity of the Centre is unique in the Nordic context. One reason for this may be that the middle and working classes retain stronger roots in the countryside in Finland than in other Nordic countries.

Meanwhile, the National Coalition failed to win over voters. Its campaign slogan, tarvitaan korjausliike (en. repairs are needed), sounded hardly credible from a party that has been more or less at the helm of power for the past eight years.

Its chairperson and his new team, in turn, were after a brief honeymoon period deemed a bad fit for the bleak economic times.

Antti Rinne, the chairperson of the Social Democrats, fought a defensive battle and erred on the side of caution in order not to alienate any voters – to little avail.

The Centre Party held its breath running a discreet campaign. Although voter support for the party declined from its peak early this year, the party successfully clung on to its status as the largest party in the country.

The Green League gained 5 seats in the Parliament to take its total to 15 as its support rating recovered, by 1.3 percentage points, to the levels of 2007. It succeeded in its change of generation and expanded its support base to win at least one seat from eight different electoral districts.

The election results have given Sipilä all the cards in the government negotiations and may yield a genuine change in the decision-making culture – especially with both the opposition and ruling parties agreeing that the present system of governance cannot continue.

Sipilä is likely to be able to run his cabinet like a chief executive would a company. This is precisely what his acquaintances from the business sector expect him to do. Issues would be presented to the Cabinet Committee on Economic Policy where its chairperson – Sipilä – would take decisions like a chief executive. The Government would not vote but act according to the wishes of Sipilä.

He is also expected to be able to impose his values on both the culture of governance and the outlines of the government programme, with all parties having expressed their interest in forging the Government.

“I don't look primarily at the election results,” the Prime Minister-designate said in an interview with YLE following the completion of the vote count on Sunday.