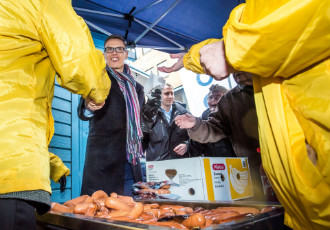 Prime Minister Alexander Stubb (NCP) has stepped up his efforts to woo the grey vote as the parliamentary elections draw near.

The chairperson of the National Coalition Party reminds that pensioners built Finland under circumstances considerably more difficult than the present. Pensioners, he adds, should consequently not be thought of as a social burden.

“We have roughly 1.5 million active pensioners who are usually full of life. We have to find solutions that don't punish pensioners or make them feel like they're being treated unequally,” Stubb emphasises.

The National Coalition has pledged to cut income taxes by up to two billion euros over the next four years. “That would also apply to pensioners,” highlights Stubb.

In addition, the party is prepared to freeze index-based increases – that is, to waive increases in transfer payments such as child benefits even if the prices of food, goods and services went up. Earnings-related pensions would be unaffected by the freeze, according to the Prime Minister.

The National Coalition did, however, seek to cut earnings-related pension indices during the current electoral term.

“This way, we can make sure that pensioners aren't subjected to higher taxes than wage earners and that pensioners don't feel like they're being treated unfairly,” Stubb says.

He reveals that he is also prepared to re-consider his position on the surtax on high-income pensioners that the National Coalition approved as a part of the Government. At present, a surtax of six per cent is levied on annual pension incomes exceeding 45,000 euros.

While members of the National Coalition have demanded that the surtax be abolished, Stubb reminds that the Government is simply re-assessing tax rates across the board.

Taxes and tax-like revenue contribute some 40 billion euros to the public coffers every year, thus representing a substantial share of the annual government budget of roughly 53 billion euros.

“We have to look into where tax revenues come from and whether they're fair. Our basic philosophy is that taxes on pension income shouldn't be as high as earned income, meaning that the pension tax and income tax should be at the same level,” explains Stubb.

The National Coalition estimates that roughly half of the two billion euro shortfall created by the proposed tax cut would be wiped out by its positive impact on job creation and employment. “The income tax cut would put 50,000—55,000 people to work,” Stubb states.

The second billion, in turn, would be scraped together by adjusting the so-called Pigouvian taxes, such as tobacco, alcohol and fuel taxes. “You must be ready to raise Pigouvian taxes, but taxes linked to employment and diligence shouldn't be raised,” says Stubb.

The proposed tax cut is according to the National Coalition conditional on the ability of labour market organisations to hammer out an agreement on extremely moderate wage hikes.

The National Coalition won 44 seats in the Parliament with its 20.4 per cent share of votes in the previous parliamentary elections. However, voter support for the party has slipped as low as 17 per cent during the tenure of Stubb. The chairperson insists that the mood on the campaign trail promises a larger vote share for the party than opinion polls currently suggest.

The fact that Stubb has over 200,000 followers on Twitter should be considered a personal achievement. Another, albeit a less reliable indicator of his popularity is the plethora of selfies voters have insisted on taking with him.

“People come to me and want to take one. That's today's equivalent of an autograph. It's terrific,” Stubb comments.

The Prime Minister has not concealed his desire to form a right-wing Government with the Centre and estimates that the policies pursued by the parties are similar from a number of viewpoints. Both parties, for example, are prepared to cut taxes on earned income.

The increase in the standard earned-income deduction proposed by the Centre would not, however, relax the tax burden of pensioners as demanded by Stubb. The Prime Minister is careful not to criticise the platform of the opposition party and believes the social agreement proposed by its leader, Juha Sipilä, to be a good idea.

This article is the eight and final part of a series of interviews by Helsingin Sanomat with the chairpersons of the largest political parties in Finland.