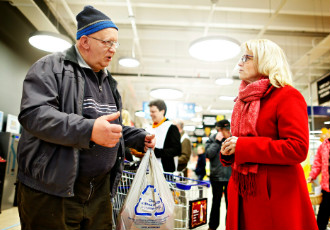 The Christian Democratic Party will not give up the fight and will continue to seek a way to overturn the decision to extend marriage rights to same-sex couples in the next Parliament, chairperson Päivi Räsänen assures.

“The right to criticise decisions you consider misguided is part of democracy,” says Räsänen, who disapproves of the idea of same-sex marriage.

She refrains from speculating on the future in more detail prior to the upcoming parliamentary elections. She is, however, confident that the Christian Democrats will fare better in the elections than opinion polls currently suggest.

“That's happened many times before,” she reminds.

Räsänen has publicly declared that the Christian Democrats will head into the elections with two objectives: a place in the Government and a greater number of seats in the Parliament.

Forecasts contrastively suggest that the party is set to lose two seats and will have to settle for four seats in the Parliament. Barring a miracle, the 55-year-old chairperson is likely to hand over the gavel to her successor this summer after ten years at the helm of the Christian Democratic Party.

The Government of Prime Minister Alexander Stubb (NCP) ended its term in office in disarray as the two largest ruling parties – the National Coalition and the Social Democrats – lashed out at each other with little restraint.

“That's not how structures are renewed,” reprimands Räsänen.

According to her, the main ruling parties must accept the blame for the disarray for being more concerned about bumping their approval ratings than national interests. Jyrki Katainen (NCP) and Jutta Urpilainen (SDP) as well as their successors Stubb and Antti Rinne (SDP) all deserve criticism for their lack of courage, Räsänen says.

“What do the main ruling parties have to show for structural reforms?” she asks, lauding the administrative overhaul of the Police of Finland by the Ministry of the Interior. She estimates that in addition to the Christian Democrats only the Swedish People's Party has managed to implement reforms in its administrative sector.

As a result, she believes the next Government should be formed solely by election winners and parties with a solid track record in implementing reforms. The Christian Democrats would according to her embrace the portfolio of the Minister of Social Affairs and Health as an opportunity to oversee the reform of social welfare and health care services.

The ongoing trial of Jari Aarnio, a former head of drug enforcement at the Helsinki Police Department, has raised a number of questions about police operations. Räsänen as the cabinet member responsible for matters related to the Police of Finland reveals that she watched the case unfold “in shock”. She has also filed a request for inquiry into the use of police informants.

She refuses to acknowledge her responsibility in the matter, insisting that her predecessors are to blame for any possible mistakes.

Räsänen also reminds that police officers will require forcible measures to combat serious crime also in the future. “Their use must be supervised,” she adds.

Although she criticises the Government for its failure to implement structural reforms, she takes credit for overturning one of them – a proposal to distribute child home care allowances evenly between both parents. The proposal, the Christian Democrats estimated, would have seen the Government to interfere in family matters.

Advocates of the proposal, in turn, estimated that it would have promoted gender equality in the working life.

Räsänen firmly denies allegations that she believes mothers should stay at home to look after their children. “My husband was at home looking after the children for six years,” she highlights. There are, however, other means to promote gender equality, such as narrowing the wage gap between men and women, she points out.

This article is the sixth part of a series of eight interviews by Helsingin Sanomat with the chairpersons of the largest political parties in Finland.