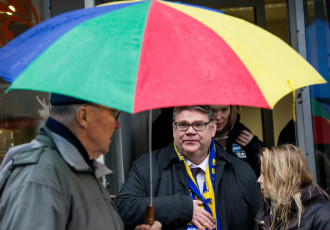 The supporter base of the party, in turn, consists largely of skilled workers and small business owners.

The lack of female candidates is a problem the party may have realised too late. “Women present us with a great opportunity to grow. We must improve in that respect,” acknowledges Soini.

The Finns Party is, however, opposed to gender quotas. “I simply want to be a conductor, not to dictate who should be selected for what [position],” Soini says, reminding that talented women have ascended to plum positions within the party.

“When we appoint a well-known woman as party secretary, it immediately stirs interest.”

He also identifies Johanna Jurva and Arja Juvonen as strong candidates but laments that their hard work is often overshadowed by “cuckoo clocks” such as himself.

Soini recently butted heads with Juvonen on the issue of marriage laws, with Juvonen voting in favour of equal marriage rights despite Soini reminding that the party conference has expressed its opposition to gay marriage. “I hold no grudges despite our disagreement,” he now assures.

He similarly singles out Jutta Urpilainen, a former chairperson of the Social Democrats, for praise despite not seeing eye-to-eye with her on the issue of Greek bailout. “I and Jutta get along well in other subjects, but the swap agreements, which she claims are collaterals, are the only issue we continue to disagree on,” Soini says before bursting out laughing.

Urpilainen, Soini adds, was treated harshly by the Social Democrats. “I don't think she was ever allowed to focus on her responsibilities,” he views.

Soini estimates that the expertise Urpilainen garnered during her tenure as the Minister of Finance warrants appreciation. He also believes the fact that Urpilainen continues to do her utmost for the Social Democrats on the campaign trail instead of accepting “a green branch” – an assignment abroad – to be an indication of her integrity.

The Finns Party won a total of 39 seats in the previous elections.

Its parliamentary group, however, currently consists of 37 members after James Hirvisaari was expelled and established his own parliamentary group, Change 2011, and Laila Koskela crossed the floor to the Centre. Jussi Halla-aho, in turn, was replaced by Mika Raatikainen after his appointment to the European Parliament.

The opposition party has managed to steer clear of controversy in the final stretch of the electoral term, although Teuvo Hakkarainen, a self-proclaimed man of the people, has become somewhat of a celebrity.

A repeat of the election victory of 2011, the so-called jytky, will certainly prove difficult. The Finns Party has set its sights on a vote haul entitling it to 40 seats in the Parliament but must bolster its support rating among voters by a couple of percentage points from the current 15 per cent in order to achieve that.

The Finns Party has one advantage over other major parties. Incidentally, it is also a burden.

“The SDP can't do a thing without SAK [the Central Organisation of Finnish Trade Unions] showing an orange if not a green light. The same applies to the National Coalition and EK [the Confederation of Finnish Industries] as well as the Centre and MTK [the Central Union of Agricultural Producers and Forest Owners]. We're as free as a bird in the sky,” Soini explains.

In the same breath, he admits that the Finns Party has failed in its attempts to infiltrate labour market organisations. Its freedom, it turns out, is also a burden. “We have a number of chief shop stewards, but we haven't penetrated the administrative bodies of SAK, nor those of MTK and EK.”

This article is the fourth part of a series of eight interviews by Helsingin Sanomat with the chairpersons of the largest political parties in Finland.