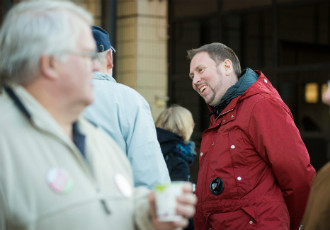 The Left Alliance is regularly accused of a lack of understanding of economic realities. The 38-year-old chairperson of the opposition party, Paavo Arhinmäki, is determined to dispel such accusations.

“We know today that 80 per cent of the corporate tax cut has poured out in bigger dividends and only 20 per cent in investments. Unfortunately, we were right,” says Arhinmäki, who has held the reins of the Left Alliance for nearly six years.

As part of the Government of Prime Minister Jyrki Katainen (NCP), the Left Alliance agreed to cut the corporate tax from 22 per cent to 20 per cent despite initially expressing its concerns about the effects of the tax cut.

“Lowering the corporate tax was a mistake, but it can be fixed,” assures Arhinmäki.

The Left Alliance walked out of the Government roughly a year ago in protest of a decision to freeze index-based increases in social security benefits to students, the elderly and the unemployed. A return to the benches of the opposition may have also been perceived as an opportunity to win over more voters.

At present, the party has set its sights on winning 18 seats in the Parliament, 6 more than it currently has.

Arhinmäki assures that he is not content to remain in the opposition but speaks fondly of the prospect of forming a coalition with the Centre, the Social Democrats and the Green League. “All parties must set their sights on the Government. They'll have to approve bad decisions, but they'll also pick up wins,” he explains.

He identifies the increase in basic social security, the increasingly progressive tax system and the abolishment of labour availability consideration for spouses among the key achievements of the Left Alliance in the Government.

“A defensive victory is still a victory. If I hadn't been the minister responsible for student support, we'd no longer have an allowance-based student support system. A proposal to shift toward a loan-based support system was under consideration. I said that I'll never approve it.”

The Left Alliance is campaigning on a markedly distinct platform. The opposition party is a steadfast advocate of aggressive fiscal stimulus and demands that billions of euros be invested in both ecologically sustainable industries and the health care and social security systems in the years to come, instead of introducing further spending cuts.

The investments would necessitate further borrowing.

Meanwhile, the party demands that measures to address the shadow economy and “the leakage of tax revenues” be adopted. The costs of these phenomena, it estimates, amount to billions of euros.

“We've pursued cut-based policies for seven years, but unemployment has only increased, economic growth halted, services eroded and the public debt grown. Isn't it time for us to admit that we should pursue different kinds of policies,” asks Arhinmäki.

The Left Alliance believes public investments are required to kick-start the economy particularly due to the lack of private investments.

Arhinmäki also calls attention to the fact that a decision on the disputed Rail Loop Line was postponed until after the upcoming parliamentary elections. “The Rail Loop Line would make it possible to allocate land for reasonably-priced flats in the capital region, but those who believe the project is only for Helsinkians are wrong. The marshalling yard in Helsinki is full. The Rail Loop Line would free up capacity to allow trains across Finland to stay on schedule.”

The road network is similarly in need of rehabilitation, he concluded recently after spending 2,400 kilometres on the road while visiting each of the 13 electoral districts in Finland.

One of the main objectives of the Left Alliance is to combat unemployment. “Last year alone, over 4.8 billion euros was paid out in unemployment benefits. Meanwhile, we ran up over 5 billion euros in new debt,” Arhinmäki points out.

Although the debt-to-GDP ratio of Finland has already breached the 60 per cent limit prescribed by the European Union, the chairperson of the Left Alliance is prepared to increase borrowing. “We can go over the 60 per cent mark temporarily. Unless we do, we'll go over it permanently,” he argues.

The worst legacy lawmakers can leave to the future generations is a shortage of jobs, services and decent schools, according to Arhinmäki. “Young people without work and education would represent our greatest sustainability deficit. No society could sustain that.”

This article is the first of a total of eight interviews by Helsingin Sanomat with the chairpersons of the largest political parties in Finland.