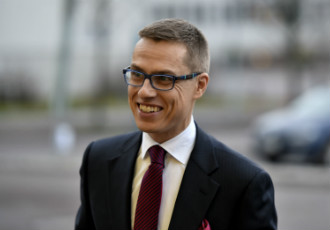 Prime Minister Alexander Stubb (NCP) on Thursday commented on news that the Social Democratic Party has edged ahead of the National Coalition Party in a solemn but calm manner.

“I wouldn't regard this as a nosedive but rather as the situation stabilising. The reality is that support for the National Coalition is 16 to 17 per cent. We have an incredible amount of work to be done before the elections on 19 April. That is the only poll that matters. We'll now work to lift the National Coalition and the homeland,” Stubb said.

The Prime Minister declined to comment on the advantage created by the Centre. “This is an occupation where it's no use looking around you. Instead, you must look into the mirror and think about what you could do better,” he explained.

Timo Soini (PS) was similarly willing to look into the mirror following news that voter support for the Finns Party has continued to decrease. “It's clear that I have to carry the burden. Headwinds are what will put your resolve to the test,” he said.

The opposition party would capture 14.2 per cent of the ballot if the parliamentary elections were held today, according to the poll.

Similarly to the National Coalition, the Finns Party is willing to turn its attention to the share of voters who have yet to make up their mind. “That's nearly 40 per cent, and it distorts the big picture. Older supporters of the Centre and Social Democrat always express their views, but younger people do not,” Soini pointed out.

“Last time, we emerged victorious due to a rise in voter turnout. There are no shortcuts,” he added.