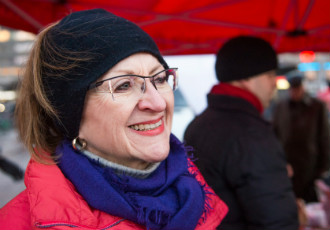 The Social Democratic Party has pulled 0.2 percentage points ahead of the National Coalition Party, according to a poll by Helsingin Sanomat.

Although the gap remains within the margin of error of the poll, the resurgence of the Social Democrats is remarkable in light of its prolonged slump in opinion polls. The previous time voter support for the Social Democrats exceeded that for the National Coalition in a poll by Helsingin Sanomat was in May 2008.

The Social Democrats has thereby overtaken the National Coalition in popularity for the first time during the ongoing electoral term – only four months before the parliamentary elections in April. The change in the power balance between the parties is attributable to both a marginal increase in support for the Social Democrats and a decline in that for the National Coalition.

Voter support for the Centre Party, in turn, remains in a league of its own: If the parliamentary elections were held today, the opposition party would capture 26.1 per cent of the ballot, the poll finds.

Overall, the support ratings of parties have swung considerably over the past four years.

The Finns Party momentarily overtook the National Coalition as the most popular political party in Finland in the aftermath of the 2011 parliamentary elections. The National Coalition then reclaimed and clung on to the title until the resurgence of the Centre last summer.

The Centre had been in the doldrums since its devastating loss in the previous parliamentary elections, with its support rating plunging to a low of 13.2 per cent. Since then, voter support for the opposition party has doubled.

The most recent poll by Helsingin Sanomat also finds that voter support for the Finns Party has fallen by two percentage points to 14.2 per cent – a new low since the breakthrough of the party in the 2011 parliamentary elections.

One reason for the decline of the Finns Party may be the willingness of Timo Soini to shun the media limelight. As a religious man, Soini has decided to step off the soapbox for the holiday season and not hit the campaign trail until next year.

The yawning gap created by the Centre, however, is more difficult to account for. It is unlikely to be a result of the proposals of chairperson Juha Sipilä for a growth fund and a social agreement, but rather that of public disillusionment with the Government and the consequent desire for change.

The laid-back demeanour of Sipilä also appears to appeal to many voters.

One-third of the 2,442 people surveyed by TNS Gallup between 17 November and 12 December either refused to disclose their party of preference or indicated their intent to abstain from voting. The share of undecided voters, in turn, has increased moderately and is currently above long-term averages.

In the previous parliamentary elections 29.5 per cent of eligible voters abstained from voting.

Parties are therefore gearing up to compete for the support of roughly 1.2 million undecided voters and have already commissioned surveys to work out who to target with their campaigns. The parties are similarly interested in the group of people who intend to vote but have yet to decide who to vote for.

Nearly 85 per cent of respondents to the poll indicated that they are fully or relatively sure of who to vote for come April.