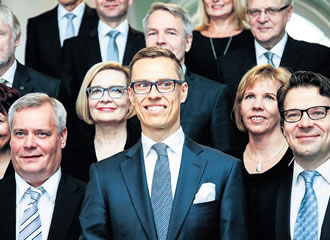 Roughly half of Finns are dissatisfied with the Government of Alexander Stubb (NCP), finds a poll by Helsingin Sanomat.

The popularity of the Government has fallen in the wake of the appointment of Alexander Stubb (NCP) as Prime Minister, finds a poll commissioned by Helsingin Sanomat and carried out by TNS Gallup between November and December.

The Government is now exceptionally unpopular, summarises Sakari Nurmela, a director at the market research company.

"The Government of Jyrki Katainen (NCP) received a positive evaluation from 38 per cent of respondents no more than two years ago. Today, the corresponding number is 16," Nurmela highlights.

As many as 13 per cent of respondents also indicated that they are very dissatisfied with the Government – a share that according to Nurmela corresponds to the modest public support enjoyed by the Government of Esko Aho (Centre) amid the depression of the 1990s.

When Katainen stepped down as Prime Minister in June, roughly 25 per cent of Finns were pleased and only 8 per cent very dissatisfied with the actions of his Government. "The changes reflect the support ratings of parties," points out Mari K. Niemi, a senior researcher at the Centre for Parliamentary Studies of the University of Turku.

On the other hand, most supporters of the National Coalition remain adamant that the party has exercised its responsibilities in the Government successfully. Supporters of the Social Democrats, in contrast, are more disappointed with the achievements of their party of preference.

The wider public is less generous in its appraisal of the National Coalition: With nearly half of respondents voicing their dissatisfaction with the party, the share of dissatisfied respondents has grown by 15 percentage points since last summer.

Meanwhile, the endeavours of the Social Democrats received roughly as much praise and criticism as six months ago.

The Christian Democrats, in turn, are by far the most unpopular party in the Government, according to the poll.

The two experts in political science estimate that the waning popularity of the Government is attributable especially to the uncertain economic conditions. "Whenever the economic situation is off-track, you turn your attention to whoever is running the country. The largest party will shoulder most of the responsibility," explains Niemi.

Although economic growth was sluggish already during the tenure of Katainen, crisis awareness did not sweep over Finland until after the summer.

What is crucial for the popularity of politicians is their ability to explain the difficult conditions, estimates Niemi. "Katainen had already learnt the art of explanation, but Stubb as a new Prime Minister is finding it harder to offer plausible explanations."

Another problem faced by Stubb is the fact that his dynamic and positive leadership style fails to conform to the prevalent economic conditions, gauges Niemi. Some may even consider his playful approach grotesque.

"Even when Stubb makes a more serious appearance, it fails to bolster his credibility because he's considered dull. It's unfair, but politicians have only so much leeway," she explains.

Erkka Railo, a senior researcher at the Centre for Parliamentary Studies of the University of Turku, reminds that Stubb is also only asserting his control over the National Coalition.

The situation is difficult for the incumbent Prime Minister for a number of reasons: The economic conditions are precarious. The parliamentary elections are practically right around the corner. The National Coalition has recently replaced both its party secretary and the chairperson of its parliamentary group.

Moreover, several visible members of the National Coalition have been guilty of gaffes.

"Wetland policy represents the latest blunder," Railo says, referring to a decision by Sanni Grahn-Laasonen (NCP) to suspend preparatory work on an anticipated wetland protection programme soon after her appointment as Minister of the Environment.

The constructive leadership style of Juha Sipilä, the chairperson of the Centre, appears to conform to the difficult times, estimates Niemi. "The Finns Party is the barking mutt, but the Centre isn't against every proposal. It has even offered its help to the Government."

Sipilä, she adds, has presented himself as a saviour who transcends party politics. "Which, of course, is not true," Niemi says.