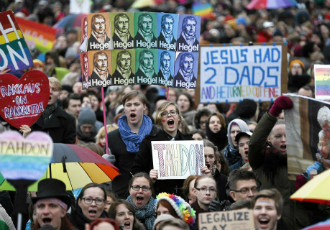 The Grand Committee of the Parliament on Wednesday approved a proposal to grant marriage rights to same-sex couples by a 17-8 vote.

“This means that the decision of the session hall remains valid,” explained Riitta Myller (SDP), the chairperson of the Grand Committee. She described the debate that preceded the vote as positive and constructive.

One of the most vocal proponents of equal marriage rights on the Grand Committee, Lasse Männistö (NCP), expressed his delight with both the contents of the proposal and the progress made on the issue.

“Because we have a clear-cut decision of the plenary session, it should also be respected,” he stated.

Opponents of the proposal, similarly, had no choice but to accept the results of the vote. “It does seem quite clear now,” admitted Juho Erola (PS).

Erola also reminded that it is difficult to predict whether or not the issue will become a major talking point in the run-up to the looming parliamentary elections or the subsequent government negotiations. “It's too early to comment on that as we don't know which parties will form the Government.”