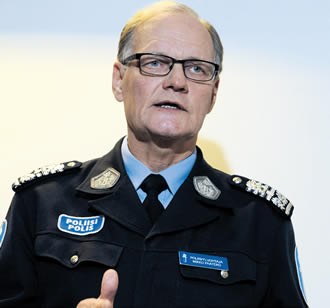 A task force appointed to contemplate the role of the Finnish Security Intelligence Service (Supo) has identified three alternative models for the organisation of Finnish security and intelligence operations in the future.

In a report presented to Päivi Räsänen (Christian Democrats), the Minister of the Interior, on Wednesday, the task force refrains from stating its preference among the alternatives.

Ultimately, a decision on whether to allow Supo to continue in its current capacity or to establish a new security intelligence service will be taken by policy-makers. The issue is expected to be on the agenda in the government negotiations to be held after the upcoming parliamentary elections to ensure that a vision for the organisation of security and intelligence services is inscribed into the next government programme.

"This is a decision that must be taken at the political level, carefully and without prejudices. I have no objection to Supo breaking away from the police organisation, despite there being no pressing need to overhaul the role of Supo," says Mikko Paatero, the National Police Commissioner.

The Ministry of the Interior appointed the task force to mull over the role and powers of Supo roughly a year ago, after Ilkka Salmi, the director of the Situation Centre of the European Union, proposed that Supo be dissolved in its current configuration and transformed into a modern intelligence agency.

Later, another task force was set up by the Ministry of Defence to mull over the extension of online surveillance powers to Supo, other police units and the Defence Forces.

The Finnish Intelligence Service (Finint) – as the hypothetical civilian agency is already referred to within Supo – would not be bound by the principles governing the pre-trial investigations and coercive measures of the police but a new broader purview would have to be defined for it.

"The Police Command agreed a few years ago to remove the term police from the English name of Supo," Paatero points out. Supo was previously known as the Finnish Security Police.

Another model proposed by the task force is to maintain Supo as part of the police organisation but transfer it under the direct supervision of the Ministry of the Interior.

Paatero is unsure of the merits of this alternative. "There has to be one police unit in Finland that operates under the Police Command," he argues.

Supo has indicated its preference for this model due to the extent of budgetary independence it would provide.

The third and final option is to maintain Supo in its current configuration under the Police Command.

"The upside of this option is that co-operation between Supo and other police units would be uncomplicated," says Paatero.